Review: Nkeiru Okoye’s Opera 'Harriet Tubman: When I Crossed the Line to Freedom' 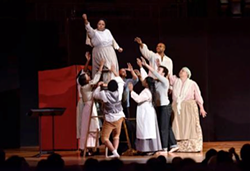 Opera is a great medium for exploring the courage of acting for freedom and the personal cost of heroic resistance. There is something built into the art form that deepens our view of even the most resolute of actions, showing us the often tragic consequences of taking the courageous path. We can hardly hear Vissi d’arte without understanding both Tosca’s heroism and the pain that comes with it.

Heroism and its costs are at the center of a new opera about Harriet Tubman, written by Nkeiru Okoye and premiered in its condensed, one-hour version this month in Cleveland and Oberlin. Presented jointly by the Oberlin Conservatory of Music, the Oberlin Opera Theater, and Cleveland Opera Theater, Harriet Tubman: When I Crossed that Line to Freedom tells the familiar story of the escaped slave and liberator, who made some thirteen dangerous journeys across “the line” back to slavery, in order to free her family and many others.

Okoye, who wrote both the score and the libretto, gives plenty of scope to Tubman’s iconic courage. She also shows the pain — physical and spiritual — of the young girl discovering that courage through the brutal abuses of slavery; through the anguish of her dangerous and lonely journey toward freedom; and through the alienation of a life in freedom far from home and family, where she finds herself “a stranger in a strange land.” This Tubman is not just a Moses-like liberator, but also an individual from whom we learn about the accumulated hurts and losses of slavery. As she sings in the powerful finale of Act I: “When I crossed that line, into freedom, I was without my family. I’ll keep crossing that line to freedom, until we are all free.”

Read the article on ClevelandClassical.com