February 18, 2016 at 10:43 AM
27 comments
Update: The story below, along with the headline, has been updated to more precisely reflect the fact that Brian Zimmerman's salary increase was voted on by the Board of Park Commissioners. It previously had stated that Zimmerman gave himself the raise. Updates below are bolded. 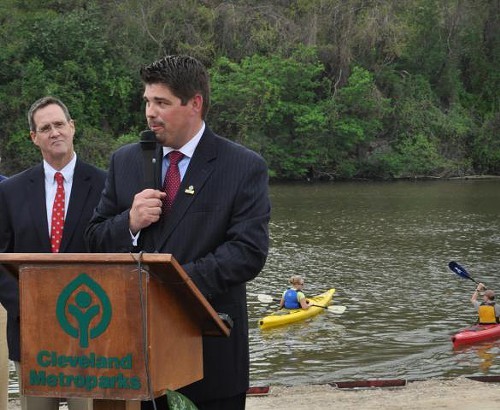 Just like every year, Cleveland Metroparks CEO Brian Zimmerman has received a substantial annual raise. But his pay increase for 2016 is his largest and most brazen since he took over the park district in 2010.

As authorized by the Board of Park Commissioners, Zimmerman will be making $220,000 in base salary this year. That represents a $35,000 raise.

Not only does the raise fly in the face of previous recommendations by salary consultants, it required a restructuring of a contract that that was voted on in December, 2014, with built-in raises and perks.

The Board of Park Commissioners approved Zimmerman's new contract at the January 27, 2016 board meeting, and they did so as stealthily as possible. As with all compensation matters, the CEO's pay was discussed in a closed-door "executive session."

When the commissioners returned, they "moved on an action to deal with executive compensation."

"The recommended action," said commissioner Debbie Berry, "addresses both the Chief Executive Officer and the Chief Financial Officer's salary adjustment. It will be submitted in writing for the record." (You can hear the very brief announcement in section B of the 1/27 audio).

The details of that "adjustment" only emerged when the minutes of the meeting were posted this week.

Also in December, 2014,  the commissioners adopted the Ohio Public Employees Retirement System (OPERS) "Fringe Benefit Pick Up Plan for the Chief Executive Officer."  Zimmerman also drives a new Jeep SUV that he got in 2015, with civilian plates, courtesy of the Metroparks.

The item above reveals that in November, the Board of Park Commissioners "engaged" the executive compensation firm Pay Governance to "research and review" direct compensation relative to the CEO and CFO.  As a result, Zimmerman's employment agreement was modified.

There is no record of a Pay Governance review in any of the Metroparks' November board-meeting documents. But Board President Dan Moore, at the meeting Thursday morning, defended the pedigree of Pay Governance and said that anyone could have access to the firm's recommendations.

From the Pay Governance LLC website: "Our work helps to ensure that our clients' executive rewards programs are strongly aligned with performance and supportive of appropriate corporate governance practices."

Pay Governance's local Partner Donald Kokoskie declined to comment on his involvement in the compensation review, or even to say if his team produced a paper document, advising Scene to speak with the Metroparks instead. Both Metroparks Marketing Director Sanaa Julien and Communications Director Rick Haase were unavailable for comment Wednesday, in meetings most of the day.

Wednesday evening, Julien told Scene by email that our questions — how much did the review by Pay Governance cost? Why was the firm "engaged" in the first place? — required some research, but she would respond as soon as possible. We'll update with info when we receive it.

Zimmerman arrived at the Metroparks in 2010 with a salary of $145,000. Every year, he's received decadent raises authorized, as always, by the Board of Park Commissioners. In 2013, Cleveland.com's Mark Naymik and Scene both cried foul when Zimmerman's annual pay was raised from $165,000 to $178,000 on the heels of the tax levy.

(Zimmerman's salary is funded by taxpayers, which is why we tend to make such a stink about it.)

In 2011, the Metroparks hired salary consultants to pave the way for raises down the road. Three pay grades were added on top of the existing executive pay scale. The maximum salary established at that time was $204,000, more than anyone in the history of the park system had ever made. Zimmerman, though, (whose apologists cite the impressive waterfront development under his leadership and his expanded role as "CEO" vs. "Executive Director"), was still a couple of years away from the $204,000 threshold.

But now, disregarding that pay scale entirely, Zimmerman has been launched into the stratosphere. The board vote was outside the public eye, and no explanation for the raise was provided until Scene published the first version of this story Thursday.

Were this a gossip column, we'd mention that in January, Metroparks' CFO Dave Kuntz jumped ship to take a position at Tri-C. There, as executive vice president of finance and administration he makes — you guessed it —  $220,000.

This is speculation, but those familiar with how Zimmerman operates said they could easily see him pouting about a former underling getting a new job making more money than he does, and then finding a firm to justify an increase to put him at the same level.

Kuntz did not respond to requests for comment by phone or email Wednesday.