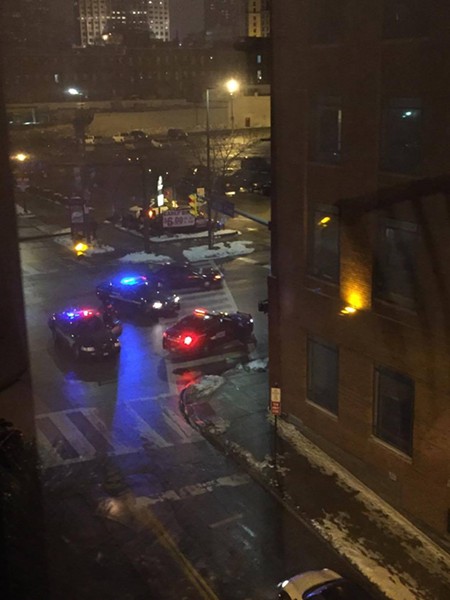 After police blocked off W. 9th Street Monday night and arrested three people for their involvement in a shooting at Krush clothing store, two now face charges and are being held on bond.

Patrick Burton-Hill, a 22-year-old man accused of opening fire inside Krush, is being held on $250,000 bond. It's so high, Assistant County Prosecutor Brian Murphy said, because Burton-Hill is from California.

Burton-Hill's public defender said that her client has been living in Cleveland for six months.

Additionally, Krush employee Heriberto Caraballo is being held on $5,000 bond. He faces charges for having an illegal firearm in the store. Caraballo has been convicted on drug charges in the past.

Both Burton-Hill and Caraballo appeared in court Thursday.

Details are still unclear about what happened inside Krush — police say they received conflicting accounts; it was described in early reports as a "hostage situation" — but Cleveland.com posted a video of Mahmoud Abdelhaq, the Krush employee who called the police, talking about the incident.

He said he was hiding in the bathroom for about half an hour after he phoned police, and that when he exited the store, he was handcuffed and interrogated by multiple officers.