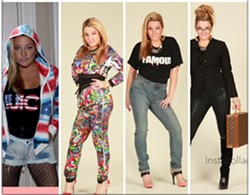 Marie started performing locally at age 7 and even auditioned for Star Search at age 10. One of the runners up for Fox 8 Cleveland Idol, Marie has also performed on New York’s Rock Me TV.

She recently formed a partnership with the Cleveland City Mission, and will donate all proceeds from the song to the City Mission to help provide food and shelter for people in need.

“We are making a difference with music,” she says. “It’s my mission and passion to help people, and I am so happy I can do it through music.”

Additionally, she just released a new music video for "Days Are Harder." Her first-ever music video, it was filmed in Cleveland and opens with a shot of the Rock Hall.