10 Concerts to Catch This Weekend 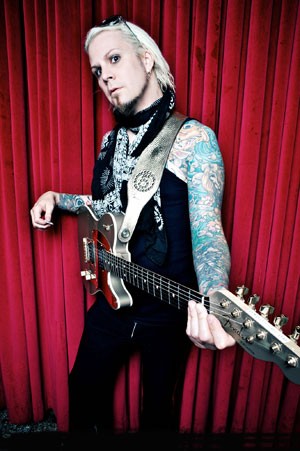 Take one look at the demonic face paint and gothic wardrobe of John William Lowery, also known as John 5, and you probably wouldn’t guess his inspiration to learn to play guitar as a boy came from TV shows like Hee Haw and The Monkees. But learn he did — enough to steal the show from a rock group he joined as a teen to make his guitar shredding its own, center-stage act. If John 5’s persona wasn’t quirky enough, his blisteringly-speedy hard rock music is just as full of surprising twists, in the form of flamenco flourishes and rockabilly breakdowns. Throughout 2016, John 5 plans to release one song, with music video, per month, which will eventually comprise his next, fittingly-named album, “Guitars, Tits, and Monsters.” He’s likely to shred his way through some of those new songs, including the latest single, “Making Monsters,” at tonight's show. (Jacob DeSmit), 8:30 p.m., $16 ADV, $18 DOS. Beachland Ballroom.

The Boys from the County Hell

When the Boys from the County Hell first got together in 2000 as a Pogues cover band, it was supposed to be just a one-night stand. But after selling out their first show at the Euclid Tavern, the group's popularity escalated. The band's been working on blending some horns into the mix so expect to hear a bit of R&B as it plays a selection of Pogues tunes when it kicks off its busiest time of the year with this warmup gig before the mayhem of St. Patrick's Day. (Jeff Niesel) 8 p.m., $15. Music Box Supper Club.

While the local hard rock act Craw never rose above cult status, it did have a strong local following and regularly played at the old Euclid Tavern, a stronghold for the heavy bands on Touch N Go, the influential Chicago label. The group possesses a distinct sound as it draws from underground metal and hardcore contemporaries of the late '80s and '90s, and the band’s music features cutting guitar tones, concussive drumming and atonal lyrics detailing what could only be described as “a neurotic perspective.” For tonight's show at the Grog, the band reunites for the first time in years. (Evan Harms) 9 p.m., $12. Grog Shop.

On Higher Power, the 2016 release from the Dirty Nil, things get heavy very fast. Right out of the gate, the band blazes punk chord structures across a borderline sludge metal landscape. It’s an effective strategy, one that touches on a number of much-beloved modern music traditions (including, e.g., emo, pop punk, shoegaze at times). With tunes like “Zombie Eyed,” the Dirty Nil taps into something youthful, aggressive and fun. And that’s the whole ethos of the band, it seems. “Our band was also just a way of learning how to play music together,” guitarist Luke Bentham told Noisey last year, discussing their roots. (Eric Sandy), 7 p.m., $8 ADV, $10 DOS. Mahall's 20 Lanes.

Dave Alvin and Phil Alvin with the Guilty Ones

Way back in 1979, brothers Dave and Phil Alvin started the Blasters, a roots rock group with a punk-y edge to its sound. Despite a Blasters’ reunion that took place about a decade ago, Dave and Phil went their separate ways, with Dave pursuing a solo career and Phil leading the Blasters onward. While we don’t know the specifics, we heard the two had a significant falling out. But after Phil had a near-death scare in 2012, the brothers put aside their differences to record the Grammy-nominated blues album Common Ground: DaveAlvin + Phil Alvin Play And Sing The Songs Of Big Bill Broonzy. Their first album together in 30 years, it features 12 songs that “capture a 30-year cross section of Broonzy’s canon, performed by the Alvins in their signature style of rollicking roots and stomping country blues.” It’s good stuff that finds the brothers working together in harmony like never before. Expect that chemistry to translate to the stage for tonight’s show. (Niesel) 8:30 p.m., $25. Beachland Ballroom.

Back in 2006, then-Rock and Roll Hall of Fame and Museum CEO Terry Stewart asked the Hesitations, a terrific old Cleveland soul group, to reunite for a gig at the museum. The band’s been playing steadily ever since and sounds as sharp as ever. The Hesitations’ roots go back to the mid-’60s, when they recorded R&B hits like “Soul Superman,” “Born Free,” and “Climb Every Mountain.” In their heyday, they mixed up R&B, gospel and soul and they still take that approach. Band leader George Hendricks recently suffered a stroke, and this show serves a benefit concert to help raise money to offset his medical expenses. (Niesel), 8 p.m., $20 ADV, $22 DOS. Music Box Supper Club.

Audiences might recognize Chris Ward’s distinctive, pipsqueak rapping style right away, especially if they’re familiar with some of the late night cartoons that aired on Adult Swim during the early 2000s. Ward, whose stage name is MC Chris, worked behind the scenes on a few Williams Street Studios shows such as Sealab 2021 and The Brak Show. But he is probably most recognized for his voice acting on Aqua Teen Hunger Force as MC Pee Pants, a deranged spider whose song “I Want Candy” infatuates the show’s impressionable meatball protagonist. If that plot sounds weird enough for you, the man’s music, which is described as nerdcore hip hop, will be right up your alley. Although the last entry to his 10-album discography came in 2014, his latest song, an ode to Star Wars called “The Fan Awakens,” dropped last December. (DeSmit), 8 p.m., $13 ADV, $15 DOS. Grog Shop.

Dark Rides and Grim Visions, the latest long player from the local psychedelic rock band New Planet Trampoline, has a particularly long and convoluted history. The group actually started working on the album, a terrific 13-song collection of trippy songs inspired by the lysergic late ’60s, eight years ago. Six Parts Seven’s Tim Gerak initially helmed the project. Those tapes were lost but the band recently returned to the studio to re-record the songs and has finally issued the album. It celebrates its release with tonight's show. (Niesel) 9 p.m., $5. Happy Dog.

Singer-songwriter Emily Wells finally made waves with her third release, 2012’s Mama, before dropping off the map. She splashes chamber pop with samples, producing trip-hop in the vein of Portishead on tracks like “Mama’s Gonna Give You Love” and “Passenger.” This year, she resurfaced with Promise, a haunting album that occasionally defaults to a beautiful cacophony of electronica and drum machine beats. Fans of Lorde and Florence and the Machine should give this self-made prodigy a listen. (Bethany Kaufman), 8:30 p.m., $10 ADV, $12 DOS. Mahall's 20 Lanes.

Rapper Scarface (née Brad Jordan and fka DJ Akshen) cut his teeth as a member of the seminal rap group, Geto Boys, back in 1989 on their album Grip It! On That Other Level. He quickly became the breakout star of the group and released his first solo album, Mr. Scarface is Back in 1991. As a member of the Geto Boys, Scarface played an integral role in hit songs such as "The World is a Ghetto," "Damn It Feels Good to Be a Gangsta" and perhaps the group's most popular song, "Mind Playing Tricks On Me." As a solo artist, Scarface has released 12 albums and collaborated with the likes of Ice Cube, Devin the Dude, Jay Z, Beanie Sigel, Nas, Master P and 2Pac among a plethora of others. To date, he has three RIAA certified platinum albums, along with three certified gold LPs. (Emanuel Wallace) 9 p.m., $20 ADV, $25 DOS. Grog Shop.