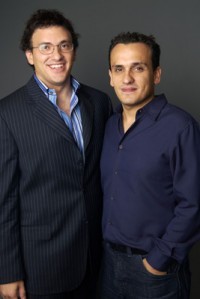 By next year, China is expected to surpass the United States as the largest market in the world for movies. And the Russo brothers, the Cleveland natives who directed Captain America: Winter Soldier (and who love Ohio City cuisine), are cashing in.

In a deal announced last week (reported by The Hollywood Reporter) Joe and Anthony Russo secured financing for Anthem & Sound, a studio that will have offices in Los Angeles and Beijing and will produce Chinese-language films.

The Russos don't anticipate directing any Chinese-language fare; their goal is produce and distribute movies that deserve a wider international audience. They first considered the possibility of a Chinese studio imprint while on a publicity tour for Winter Soldier.

"We made a lot of friends on that trip and just fell in love with Chinese cinema," Joe Russo told THR. "We made a bunch of personal trips back to Beijing to nurture and grow those relationships in the film business there."

The studio wants to have at least two films in production by the end of 2017.

In the meantime, the Russos will have their hands full with Avengers: Infinity War. (They're directing both installments of the film, to be released in 2018 and 2019.)