by Sam Allard and Eric Sandy

The city of Cleveland is seeking an unprecedented amount of riot gear and security equipment for July's Republican National Convention as emotional unrest and physical violence follow the GOP front runner across the U.S.

Donald Trump, in fact, has predicted riots if he wins the most number of delegates but is not formally nominated during the convention. It’s a prediction that local leaders have called “irresponsible” and “dangerous,” and one which continues to fuel the narrative that repressive, military police tactics are necessary during the RNC.

This month, the city posted a request for bids on a spectrum of riot gear: 2,000 sets of riot-control suits and 26-inch batons, three miles of steel bike-rack-style barriers, 25 sets of tactical armor, 300 patrol bicycles and 310 sets of bicycle riot control gear, among other equipment needs. (The police department does not currently have a bicycle unit; nor does it have a training program for such.) The bid package dwarfs similar requests from cities that hosted national conventions in recent history.

Bids are due next week, with hearings and an eventual vote to follow. All equipment must be confirmed and purchased by June, with a $50 million federal grant waiting as reimbursement for the city’s equipment and personnel costs. The RNC itself will be held July 18-21.

A $100-million security grant, split between Cleveland and Philadelphia, comes via the Omnibus Appropriations Bill that Congress approved at the end of last year. This amount has been standard for convention-hosting cities since 2004. Philadelphia, which will host the Democratic National Convention, has not yet announced its plans for specific equipment purchases.

But while the security stockpile is part and parcel of “national special security event” (NSSE) planning, the numbers at play in Cleveland are prompting national scrutiny and local concern.

To compare a bit: In 2012, the city of Tampa used its stream of federal grant funds to purchase 147 sets of riot helmets, upper body and shoulder protectors, shin guards and tactical gloves — $1.9 million for the defensive gear, all told. The city also purchased everything from gas masks and T-shirts to surveillance cameras and $15 million in law enforcement liability coverage. The batch of weaponry and security equipment pales in relation to Cleveland’s anticipated $20-million request.

The lion’s share of these federal grants — the remaining $30 million, in Cleveland’s case — goes toward personnel costs: overtime hours for local police, payment and lodging for outside law enforcement, catering for everyone involved. But it’s the equipment purchases that tend to be more impactful, because the militarized gear, surveillance equipment and expensive tech remain in the city’s ownership after the convention has left town.

“Every time an NSSE occurs, it becomes a vehicle for a permanent scaling up of surveillance in the host cities...In [2012 convention host cities] Tampa and Charlotte, the militarization of police departments through the purchase of new equipment and technology will continue to make an impact on city residents long after the conventions,” the National Lawyers Guild wrote in a 2013 paper on security at those cities’ conventions.

Surveillance cameras that were installed in Tampa and Charlotte in 2012, for instance, remained in place after the Convention.

And even though much of the equipment Cleveland is purchasing is hardly “militarized” — police horse raincoats, hydration packs, to name a few — eyebrows are still rising across the United States because of a perceived compressed timeline. The convention begins in less than four months.

The police chief who oversaw the Democratic National Convention in Charlotte said he’d ordered riot gear eight to nine months before the convention, and that a three-month lag should be expected on all orders. (“Good luck with that one,” the former chief rhetorically told The Boston Globe, in reference to Cleveland's late-in-the-works bid requests.)

On March 21, a crowd of 20 activists and community leaders stood on the steps of Cleveland City Hall to denounce the opacity surrounding the city's request for security equipment. The group insisted on greater transparency in the run-up to the event and a plan to "demilitarize" the police department following the RNC.

The city has been incredibly tight-lipped about the entire process. "We won’t comment on security issues,” is the go-to excuse, these days, for not divulging records nor allowing media into public RNC-related meetings.

Dan Williams, Cleveland’s director of media relations, when contacted by Scene Tuesday, said that his deferring all security-related questions to the Secret Service was at that agency’s request.

Councilman Brian Cummins, a stickler for transparency, told Scene that he’s frankly not expecting much information. He suspects the secret service is working in conjunction with Police Chief Calvin Williams, Safety Director Michael McGrath and Finance Director Sharon Dumas on the acquisition of equipment, and he’s not counting on them being especially forthcoming.

One alleged logistical wrinkle brought up by the Boston Globe was that a current Ohio state law precludes officers from other jurisdictions from using local police powers within city limits. For the Charlotte DNC, the North Carolina Legislature passed a temporary law giving the Charlotte-Mecklenburg PD the ability to swear in officers from other jurisdictions so they would have the same authority as Charlotte police.

A City Council spokesperson, however, said that that report was untrue. Safety Director McGrath has the authority to temporarily swear-in officers without special approval from the state.

In Cleveland, CPPA President Steve Loomis has said that 1,800 officers (both from Cleveland and elsewhere) have been committed to work the Convention. Cleveland 19 reporter Dani Carlson Tweeted that she was reaching out to law enforcement agencies in Ohio and “most counties” said they hadn’t been asked to help. The Boston Globe reported that the Chicago Police Department is considering pulling out.

Council President Kevin Kelley told Scene he didn’t know how far along the process of securing additional officers was, but said that, in general, the swearing-in would be relatively streamlined. For him, the greater concern is ensuring that officers get adequate training with unfamiliar equipment that may arrive later than expected.

Tuesday afternoon, Cleveland City Council issued a press release reminding the media that the city has been hard at work “sprucing up” public areas, and that the “ultimate authority” over law enforcement rested with the U.S. Secret Service and the Dept. of Homeland Security.

However, the release said:

“The Cleveland Police Department has been working for more than a year with federal, state and area law enforcement agencies to ensure that various forces are in coordination with each other… Cleveland is dispatching an additional 4,000 to 5,000 police officers from various law enforcement agencies throughout the region. The extra forces will ensure that Cleveland’s neighborhoods are not without police patrols during convention activities downtown.”

City council spokeswoman Joan Mazzolini said 4,000 was definitely the goal and the number could be as high as 5,000. That number would include local, county and suburban officers, state troopers, and the Ohio National Guard. Other than the iffy Chicago Police Department, Mazzolini said she didn’t know of other specific departments that might be called upon.

Mazzolini said that all temporary officers will be paid by the City of Cleveland for their service. 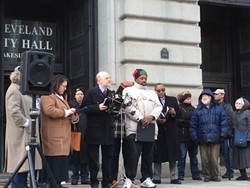 The Cleveland Community Police Commission, a 13-member body formed as part of the U.S. Department of Justice consent decree, is posing questions as well. Scene spoke with Mario Clopton, co-chair of the commission, hours after the group met with Police Chief Calvin Williams on March 22.

“We asked some very straightforward questions,” Clopton said. “Where is the money going for resources? Where is the money going for training? What is being done to ensure that the footprint being left by the equipment purchase doesn’t leave the division of police having an over-militarized feel? What is being done to train the incoming officers and personnel that are non-CPD officers and personnel, to ensure that they are abiding by the culture of police reform that is happening within the consent decree?”

Oddly enough, in Philadelphia, where Democrats will descend one week after Republicans descend upon Cleveland, the dual specters of outside agitators and a militarized police force have rarely come up. The mood is anxious, Philadelphia Inquirer City Hall reporter Claudia Vargas told Scene by phone, but not over potential protests. People are worried that the convention there is going to be a logistical headache, a lot like the Papal visit in September, 2015.

“It was a disaster,” Vargas said. “And so the city is really trying to tell people that the Convention’s going to be much less intrusive, confined to the stadium areas.”

And much like In Cleveland, Philadelphia leaders are citing the merits of non-convention-related media coverage for the city.