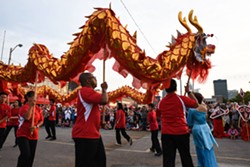 This year's dates for Night Market Cleveland, the downtown summer festival, have been officially announced. Yes, one of the best recurring events of last year is coming back.

The fest returns June 24, July 29, August 26 and September 30. Each date is held on a Friday night and features more than 100 food, arts, music and assorted other vendors.

The Night Market Cleveland festival is held at Rockwell Avenue and East 21st Street, right in the middle of Cleveland's old Chinatown. The hope for the festival is that it will be the latest step in revitalizing the area, which took a hit as Asiatown became the newer, much more popular place to visit.

Expect the official list of Night Market Cleveland vendors to be announced soon.

Miss Night Market last year? Check out our photos from one of the events to get a taste of what to expect.