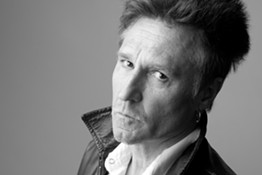 The inspirational path to a hit record usually has a few interesting twists and turns along the way, and that was certainly the case for singer John Waite when he was working on the song that the world would come to know as “Missing You.”

“Well, I thought my life up to the end of the Babys was like a Russian novel,” Waite says during a recent phone conversation. “It was intense and it was over the top and it was way colorful and it wound up with me getting married and living in the Lake District [of England] in a cottage. And then I made another solo album in New York City and lived there and then I quit and went back to the countryside of England with no intention of ever returning. Some lawyers got me out of my contract and then bang, I had ‘Missing You’ and it was No. 1.”

According to Waite, there were several different storylines that helped to fuel the lyrical content of “Missing You,” which hit the top of the Billboard charts in September of 1984.

“I had a wife that I was still married to and my marriage was in trouble and I was living out of a suitcase,” he says. “I was living in New York, separated, really and I was seeing this girl, Patty, and we ended up being engaged years later and me and Nina were great friends. It’s a combination of three different personalities who were all blonde!”

That’s “Nina” as in, Nina Blackwood, the Rocky River High School graduate, who is now well-known internationally as one of the original hosts (“VJs,” as they were called) on MTV. A chance encounter backstage at a Pat Benatar concert at Madison Square Garden eventually led to an “intense connection,” according to Blackwood, who talked about the experience in the book, VJ: The Unplugged Adventures of MTV’s First Wave.

“It felt poetic,” Blackwood wrote, of the time she shared with John. “[It was] like we had known each other in a past life.” When the “Missing You” video played on MTV, sometimes Blackwood would say that it was, “A song close to my heart.” “There are lyrics in it, like ‘a telegraph to your soul,’ that I know came from our conversations,” she said.

“When we were apart, I used to tell John that he should look up at the moon. I would send my wishes for him up to the moon so they would come down to wherever he was,” Blackwood says. “I was a sappy romantic — but that whole experience with him dumbfounded me.”

No matter how it all wrapped up, Blackwood says that, “To this day, if I see John, my heart starts pounding. I can’t help it.”

Whether it’s a song like “Missing You,” or “When I See You Smile,” a later hit from his time with the late '80s supergroup Bad English, or tracks like “Every Time I Think Of You” and “Back On My Feet Again,” from his earlier days in the Babys, Waite has recorded a number of songs that his fans remain similarly connected with. His songs often function as musical mile markers for those fans, providing a nostalgic reminder when they come on the radio of where they were at that moment in time.

Waite has his own stories and memories buried in each song, and he plans to share that information in an interactive way during his upcoming acoustic tour.

“I thought, ‘Well, wouldn’t that be cool if the audience could ask questions and I’d tell them the story of the song,’” he says. “The audience is always pretty friendly and interested and kind of chatty. They talk to you at these acoustic shows. We’ve done it before, you know, somebody will say something and we end up having a conversation with somebody in the third row. It’s all part of the show — it’s not like it’s planned.”

He says the goal is to keep the acoustic show "spontaneous and moving."

“There’s two other guys on stage playing instruments apart from me, so it’s got a band feel, but in a very unplugged way," he says. "The story will write itself — I know it’s going to be good. I can feel it. I’ve done a couple of rehearsals and the songs are interesting songs. Some of them have never been played before, so we’re going for it, really.”

The show will of course, feature Waite’s best-known material, but he’s been having a lot of fun mining the more obscure parts of his catalog to put some interesting spice into the setlist — and he says that fans can also expect that the evening will showcase his hits in a new light.

“‘In God’s Shadow,’ that was a powerful song that we never played live much and it sounds great unplugged,” he reveals. “‘Price of My Tears’ [is another one that we are working on]. We’re having a crack at ‘You (Got It)’ from the Babys — we’ve never played that live anywhere at all. You know, I think if we go out there with some obscure stuff mixed in with some of the more popular stuff, it should fly really well. It’s surprising how soulful ‘When I See You Smile’ can be when it’s unplugged. And ‘Missing You.’ There’s songs that just kind of take over.”

As the tour progresses, Waite hints that there will be room to take a chance on playing pretty much anything.

“If there’s anything that we sort of take a look at that we haven’t played, we can rehearse it backstage. It’s amazing what you can do when you take the drums out. We love our drummer — he’s great and we’re doing a lot of full band gigs this year, but it’s an interesting concept to be able to throw a complete song together in like 15 minutes, walk out on stage and play it.”

Waite continues to remain creatively active as a songwriter and Wooden Heart Acoustic — Volume 1, his most recent release, was recorded quickly with longtime collaborator Shane Fontayne (Graham Nash, Bruce Springsteen). “I tried to keep it to that honest performance and recording. It’s not analog, but I was going for an analog sound,” he says, adding that for him, “The truth lies in the unvarnished moment.”

It was an EP, partly because of Fontayne’s busy schedule. “I was hoping to get him for a full week,” Waite says. “If I’d had him for a full week, it would have been an album. But it turned into an EP and I kind of like the shape of it. I like the four songs co-existing together. They seem to make sense and I’ve always liked EPs.”

He’s now charting out plans to make a second volume and says that depending on where things go, it could very likely turn into a full album.

“That’s how it goes usually. You have one song that’s the cornerstone for a record and then you put another song in there and if they seem to fit, those two songs, if you add a third one, you’ve got a record — you’ve actually got an album or you can build on that in three different directions,” he says. “Sometimes the hardest thing in the world is to find that second song to go with the first one. But if you’re on a roll and you’re determined and you’re clear and you’re thinking and you’re inspired, that sort of stuff just happens. It’s like lighting a bonfire, you know, you throw the match in and suddenly it’s a raging blaze and you can’t really leave it.”

For all of the stories that he’ll share during the upcoming tour, Waite says that his next story might be one that will arrive in the form of a book. He’s working on what he hopes will become his first fiction novel, although he’s not sure when it might arrive.

“Well you know, I like literature. I read quite a lot,” he says. “I found I have a real interest in words and how things develop in a sentence and it’s clever. You know, when somebody does it really well, it’s really interesting. Songwriting is very much like that, if you go at it from a side angle and not just trying to sort of write ‘a song,’ you know, three minutes of whatever. But it’s inspired — it’s a whole different thing and story songs, that seems to have been my thing.”

And Waite’s life has been an interesting thing — something he’s not afraid to admit.

“Well, if you had a life like mine, you’d be trying to live it down,” he laughs. “It’s been colorful. That’s all I’m going to say about it, your honor. But it’s been a colorful life. It never stopped. When I dropped out of sight, I didn’t disappear — I was living in New York or I was back in England, but there was always a guitar in the room and I came back the next year with a new album or a new set of songs or a new tour. I’ve never really followed that thing about success being money-driven. Although I’ve made vast amounts of money, I suppose, the street is just as hip as the penthouse, you know?”