Someone Who Just Moved Here Reviews the Things You Regularly Do: The Rockefeller Park Greenhouse 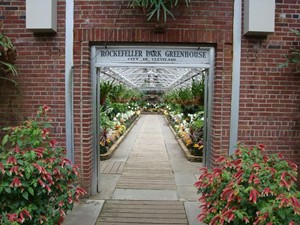 The second installment in the series, "Someone Who Just Moved Here Reviews the Things You Regularly Do." Find the previous installment here.

Cleveland’s Rockefeller Park Greenhouse has many advantages: entrance is free, it’s full of lovely oxygen-supplying plants, the parking is free, it’s really pretty, and, if you need a place to pee on the east side, the bathrooms are also free. Also, getting married there will cost you a mere $150 American dollars, which is not free but still less than the cost of a round of drinks for your bridal party.

Now, Rockefeller himself did not build this greenhouse. He did not stride onto the land one day with this top hat and cane and monocle and proclaim, “Here, I will build a structure that will allow those who ride Lolly the Trolley to take the most elegant of bathroom breaks!” In 1897 he donated 270 acres of land to the city of Cleveland, some of which would one day become the site of the greenhouse, because he was such a forward-thinking philanthropist that he knew that one day Tinder would be a thing and people would need a place to meet their dates that would be public enough to preclude murder, but private enough to allow for a hot make out session if all parties involved adhered closely enough to their profile pictures and were able to keep their crazy under wraps for the first 20 minutes.

The greenhouse is lovely, full of flora and fauna and couples you just disturbed mid-make out. There are banana trees and orange trees and grapefruit trees that you will refer to as lemon trees and realize, only later, that this is the sole reason your date never responded to your texts ever again. The greenhouse hosts special spring bulb events and December holiday events and you can feel free to like them on Facebook because they only update their page once a fiscal quarter.

Pro-tip: The greenhouse is full of mysterious, metal wheels that are connected to chains. You’re really going to want to turn one of those wheels because no one knows what they do, they’ve never been turned before, and we all know 100% for sure that the contraption that is activated once you rotate one of those large, old, rusty, metal wheels will be both calamitous and life-changing. Talk your Tinder date into doing it for you.

Dana Norris is the founder of Story Club and the producer of Story Club Cleveland, which is held the 1st Tuesday every month at BottleHouse Brewing Co. You can follow her on Twitter @dananorris.