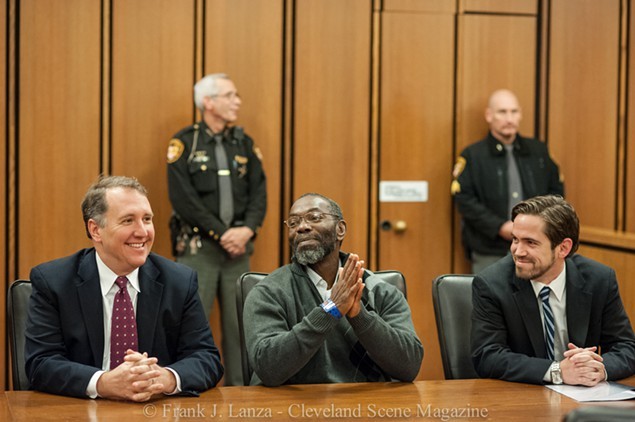 The last of three Clevelanders who were wrongfully convicted of murder in 1975 on bogus eye-witness testimony has reached a financial agreement with the state. Ricky Jackson will walk away with $2.65 million dollars from his case filed in the Ohio Court of Claims.

Jackson's case is familiar to Scene readers. Back in 2011, our investigation turned up serious questions about the three convictions — convictions based solely on the testimony of a 12-year-old boy. That reporting eventually led to the Ohio Innocence Project's increased involvement on the case. Finally, in 2014, the witness recanted his testimony, saying he'd been threatened by Cleveland police detectives into cooperating.

Jackson, Kwame Ajamu and Wiley Bridgeman were exonerated later that year. But the financial aspect of making these guys whole has been more complicated than laying out their innocence. Each received money last year from the state. The Ohio Court of Claims cases, however, is tied to time lost and lost earning, according to Cleveland.com.

Early this year, Ajamu and Bridgeman inked similar arrangements with the state for $2 million and $2.4 million, respectively. All three men have filed a federal lawsuit against the city and officers involved in their arrests. That's a separate case, and the outcome of the Court of Claims agreement has no bearing on what will play out on the federal level.