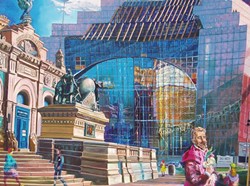 This spring, three local organizations are teaming up with one of the region’s premier art galleries for a special tribute to one of Northeast Ohio’s most talented and prolific (and relatively unknown) artists. Tregoning & Company at 78th Street Studios (Suite 101) has partnered with the Cleveland Institute of Art, ARTneo and the Artists Archives of the Western Reserve to honor the life and career of Cleveland painter Anthony Eterovich (1916-2011). This special centennial retrospective is scheduled to coincide with what would have been Eterovich’s 100th birthday.

The principal exhibition is Tregoning & Company’s A Thrilling Act: The Art of Anthony Eterovich. The exhibition’s title is part of quote from Eterovich, “Painting is the thrilling act which…encompasses a battleground of contradictions all to be resolved without compromise.”

A Thrilling Act opens this Friday, April 15, from 5 to 9 p.m. Honoring the influence of jazz on Eterovich’s work, the John Petrone Trio will perform in the gallery throughout the reception. “Tony loved to paint with jazz, American songbook, and classical music always playing in the background,” explains Tregoning & Company’s William C. Tregoning III. The exhibition at Tregoning & Company remains on view through June.

“I invite you to meet Anthony Eterovich,” says Tregoning. “His paintings, with their subjects drawn from ballet, modern dance, movies, urban experience, family, friends, soldiers-in-arms. His wry wit and sheer delight in humanity. It’s all here for your chance to enjoy it with him. Can there be any more timely celebration of Life’s best moments than through the eyes of this intensely life-affirming man, and his art? Catch yourself smiling after a while with Tony Eterovich, and you’ll have your answer.”

On April 20, the Artist Archives will honor Eterovich with a pop up office exhibition featuring a small selection of Eterovich’s work.

From June to August, the Cleveland Institute of Art will feature drawings by Eterovich in the CIA Study Collection. Eterovich taught life drawing in the Young Artists/Continuing Education department. “For more than 50 years, he taught adults and children at the Cleveland Institute of Art and chaired its Regional Scholastic Art Competition,” CIA’s Reinberger Gallery Director Bruce Checefsky says. “From 1962 to 1978 he chaired the art department at James Ford Rhodes High School. As a former student wrote upon learning of his death in 2011 at the age of 95, ‘Mr. E was my favorite teacher at Rhodes High, he always tried to encourage me and light a fire under me, and I mean everyday. I’m glad to know he lived a long and full life, wish I’d stayed in contact after school, but I never forgot him. The world has lost a character.’”

Anthony Eterovich was born in Cleveland’s Tremont neighborhood on April 2, 1916. He was the youngest of three surviving children. His parents, George and Anna, emigrated from the Dalmation coast of what is now known as Croatia. In Cleveland, George worked in the steel mills. Recognizing their son’s early talents, his parents encouraged him to draw beginning at the age of three. However, after his father suffered a stroke during Eterovich’s teen years, all three children were sent to work, and Anthony began peeling potatoes at a local grocery store.

The same year his father died, Eterovich began teaching at the Merrick House Settlement. Here, he would find a love for teaching that would last the rest of his life. During this time, he met and studied under John Teyral, and was encouraged as both an artist and educator by the legendary Viktor Schrekengost, who would occasionally allow Eterovich to lead classes for a few hours each week.

However, life works in mysterious ways, and soon Eterovich found his path once again disrupted by the inevitable nature of change. Eterovich was drafted into the US Army during World War II, where he achieved the rank of Sergeant Tech Four. During his service, he created more than thirty portraits of his peers, colonels, captains and a three-star general. In addition to teaching French while stationed in Pennsylvania and Florida, he was tasked with creating maps and topographical visualizations of landing and occupied areas, as well as silhouette identification of enemy aircraft and other vehicles.

Following his time in the army, Eterovich refocused on art and teaching. He earned a BS in Education and a Masters in Art Education from Western Reserve University in 1947. That same year, his print, Suzanne, won a First Prize Purchase Award in the Etching category at the Cleveland Museum of Art’s May Show. The next year he continued his education with honors in extended studies at Ohio University from 1948 to 1949 and the New York Art Students League from 1950 to 1954. In 1950, he married Alice Troyan, a modern dancer who had recently graduated from Kent State University with a major in Physical Education.

While studying in New York, Eterovich solicited his work to the top art dealers of the time, including Edith Halpert, who would play a major role in his career as a juror of the Sixteenth Annual New Year’s Show at the Butler Institute for American Art in 1951. Eterovich was awarded a First Prize Purchase Award for his abstract oil painting, The Merry Bench. Subsequently, Edith Halpert asked Eterovich to exhibit another painting in her Downtown Gallery in New York City.

This painting, Table Charade, was reviewed in the New York Times by Howard Devree, who said, “One of the most ambitious canvases is by Anthony Eterovich of Cleveland—Table Charade, which might have been called ‘The World is Full of a Number of Things’ and succeeds in bringing organization out of what might well have been a too complicated profusion of detail.”

Eterovich went on to teach at the Cleveland Institute of Art for more than 50 years and Cleveland Public Schools for more than 40 years. “Anthony Eterovich taught for more than forty years for the Cleveland Public School System,” his daughter Karen Eterovich-Maguire says. “He chaired of the art department at Rhodes High School from 1962 to 1978. In 1974, he obtained a major grant from the Union of Independent Colleges of Art to develop a drawing program for EMR students. He was chairman of the Regional Scholastic Art Competition from 1981 to 1989. In 2014, a classroom was named for him at the new Cleveland Institute of Art Joseph McCullough Building.”

A Thrilling Act at Tregoning and Company is the largest exhibition of Eterovich’s work in history. During his lifetime Anthony Eterovich participated in more than one hundred and fifty group exhibitions, but only two solo shows – twenty oil paintings at the Women’s City Club in 1956 and a collection of charcoal drawings at the Intown Club in 1963. His artwork is in the permanent collections of the the Cleveland Museum of Art, Butler Institute of American Art, Dayton Art Institute, Canton Art Institute, the Cleveland Institute of Art, the Artists Archives of the Western Reserve and ARTneo.