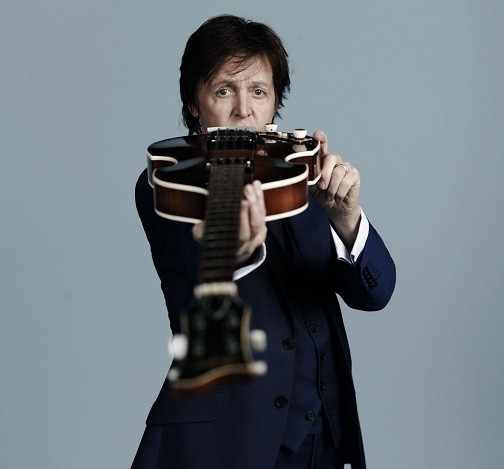 Update: The Q announced this morning that a second Paul McCartney show has been added in August. Due to overwhelming demand (duh!) the Beatle will follow up the show on August 17th with a show the night after, August 18.

Tickets for the August 18th Cleveland date are on sale now. Get 'em through theQarena.com, Quicken Loans Arena Box Office, by-phone at 888-894-9424 or at any Northern Ohio Discount Drug Mart.

(Original post 4/18/16): This morning at a press conference at Quicken Loans Arena, representatives from the Q, Live Nation and the Rock Hall announced that Paul McCartney’s One on One Tour will come to the Q on Aug. 17. The last time McCartney played the venue was in 2002.

Len Komoroski, Chief Executive Officer of the Cleveland Cavaliers and Quicken Loans Arena, talked about how McCartney has changed “pop music for generations to come.”

Greg Harris, President and Chief Executive Officer of the Rock & Roll Hall of Fame, spoke about how a portion of the proceeds from ticket sales will go toward the Rock Hall’s education programs. He also brought McCartney memorabilia from the Rock Hall, including a bobblehead and pages from the late rock critic Jane Scott’s notebook that included signatures by all the members of the Beatles.

“Everything that’s been happening in Cleveland is the result of partnerships and part of collaboration with our friends at the Q and with Live Nation,” said Harris.

“It’s a major live entertainment destination,” he said. “And Cleveland is a major destination.”

“Paul will be the first show coming out of a dynamic summer,” said Live Nation’s Michael Belkin before showing a video clip of McCartney performing live. “To get an artist of this stature here — it’s been too long. This new production is even more dynamic than the previous tour, employing massive screens and fireworks.”