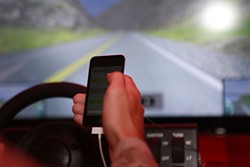 The city of Cleveland may soon have a handheld cell phone ban in place if Cleveland City Council goes forward with a push by Zack Reed to do so.

Councilman Zack Reed wants the city to ban handheld cell phone use while driving in Cleveland, which would be the next step to totally eliminating using phones while driving. In Ohio, drivers 18 and under are already banned from using cell phones. Everyone else is banned from texting only, though in some jurisdictions there are additional restrictions (using your phone while driving through Shaker Heights, for example, is a big no-no).

Reed cited the thousands of people who have died in distracted driving accidents involving a cell phone each year in the U.S. as his motivation for the legislation. He's been pushing for a vote for awhile now and says he has the votes to get it passed. Reed's been making the media rounds to get the word out and was set to discuss the measure with council president Kevin Kelley last night.