Local Singer-Songwriter Emily Keener Talks About Competing on ‘The Voice’ 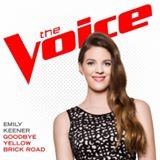 Thanks to her father’s eclectic taste in music, local singer-songwriter Emily Keener, a recent contestant on The Voice, grew up hearing a wide range of different music.

“My dad played guitar and sang all the time growing up,” says the 17-year-old via phone from her Wakeman home. “He loves all kinds of different music from classic country to classic rock and metal and pop. I grew up listening to different types of music. I thought playing guitar was the coolest thing ever. I was mesmerized by my dad. When I was 11, I decided I would play the guitar. My dad showed me a couple of chords, but then I taught myself how to play. I played until my fingers bled and practiced constantly.”

A few months after that, she became serious about writing her own songs. When she was 14, she put out a full-length and last year she released a fully produced EP. Locally, she played at clubs like Brothers Lounge and the now-defunct Winchester Tavern.

When the opportunity arose to audition for The Voice, she decided to give it a go even though she once publically proclaimed she would never audition for a reality TV show.

“I always told myself I would never do anything like that,” she says. “I made a huge Facebook post a few months earlier about why I would never audition for a show like The Voice. The opportunity arrived and I’m so glad I went and took the leap of faith. Nothing but good stuff has come from it.”

During auditions leading up to the “blind audition” that got her on the show, she performed a rendition of Elton John’s “Goodbye Yellow Brick Road” that really put her stamp on the song, turning into a beautiful ballad. For her blind audition, she performed the song again, garnering a standing ovation from the judges.

“A few years before, I heard Sara Bareilles version of the song,” she says. “It’s an amazing version. I was inspired by her take on it. I wanted a mix between her version and Elton’s version. I wanted to add some of the classic elements of the song that Sara’s version might have been missing.”

While her rendition of Jeff Buckley’s “Lilac Wine” didn’t get her enough votes to keep her on the show, which she exited last week, Keener, who was one of the final 12 candidates on the show, insists she made the right decision by picking the rather obscure tune.

“His music touches me and inspires me in so many ways,” she says when asked about Buckley. “I brought it to the producers as something I wanted to do on the show, and [Voice judge] Pharrell saw it and was like ‘yes.’ I never expected they would pick a Jeff Buckley song for me to do. I was so honored.”

In the wake of the increased exposure she received from her run on The Voice, Keener continues to work on a new album.

“I have some big local shows in the works too,” she says, adding that she’ll announce them via social media. “I never thought my appearance on The Voice would work out the way it did, but I’m so grateful for the journey it took me on.”