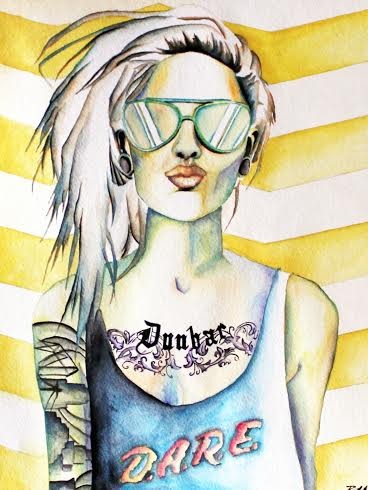 A week before May’s Walk All Over Waterloo, the neighborhood’s new coffee shop, Six Shooter Coffee Café, invites the public to its first art reception. Recently, Six Shooter owner Peter Brown asked local artist Rachel Latina to display her work on the walls around the coffee shop. Although some of her work has been hanging in there for a few weeks now, Latina has created a new body of work to exhibit. Six Shooter hosts a reception for Latina on Friday, April 29, from 6 to 11 p.m.

“The cafe proudly supports the local art scene,” Brown says. “We make a concerted effort to be a community gathering space…and we have bomb coffee. Indie Chic will be the first of many upcoming art shows at Six Shooter Coffee shop. The cafe is committed to helping develop and support the local community of artists.”

Latina adds: “Pete has been great and really supportive of not only my work but local artists as well. I’m honored to do this show and I hope it will be a kick off to many other future shows put on at Six Shooter Coffee. I love being a part of the Waterloo Arts District — it really has a unique neighborhood vibe that is all about the arts, music and local businesses.”

Indie Chic: The Evolution of a Generation explores Latina’s own cultural upbringing through portraits “exposing the evolution of girls growing up in the 90s and the women they are today; powerful, punchy and strong.”

“Typically I figure out a premeditated theme to my pieces that isn’t too relative to me or my personal life,” explains Latina. “These works are far more personal to me than any other pieces I’ve done. They’re really a representation of the type of environment and people I know and grew up with. It’s my reality and my generation as it is now.”

Rachel Latina is a Cleveland native and eight-year veteran of the local art community. Her paintings often explore themes of culture and femininity, and can be seen regularly in her studio at Article Gallery (15316 Waterloo Rd.) in Collinwood, as well as several recent group shows in galleries throughout the city.

Indie Chic remains on view through May 26 during regular business hours: Monday through Friday from 7 a.m. to 8 p.m. and Saturday and Sunday from 10 a.m. to 8 p.m.