Update: After some public fury that you undoubtedly heard about, including a Change.org petition drive and approximately as many angry social media posts directed at Sherwin Williams as people that attended the Cavs victory parade, the company announced in a statement that the LeBron banner will in fact not be taken down for the RNC. Via Cleveland.com:

Sherwin-Williams' President and Chief Executive John Morikis said in a statement Tuesday that "For 150 years, Sherwin-Williams has been proud to call Cleveland our home, and we're committed to doing the right thing for the people of this great city. For the last year, we've been planning to hang a celebratory banner outside our building during the summer months.

"But what better way to celebrate our 150th year than with a NBA championship," he asked. "As a long-time supporter of the Cavs, and the entire community, we want the energy and excitement in this city to continue."


In addition, the company will donate $150,000 to the LeBron James Family Foundation.

The banner the company had proposed to swap out for the LBJ image during the RNC is below.

(Original story 5/5/16): Say goodbye to LeBron James during the RNC.

Well, not literally LeBron James, but Sherwin-Williams has plans to unveil a banner in place of the iconic LeBron banner across from The Q. The current banner is scheduled to come down June 20.

The new banner, if approved by the Cleveland City Planning Commission, will read "This Land is Our Land - 150 Years in Cleveland" and features one strip of red, a strip of blue and a white center.

If approved, the final design will be made in Utah then shipped to Cleveland in June where installation will take about eight to 10 hours to install. It's something, and at the very least, it's not this. 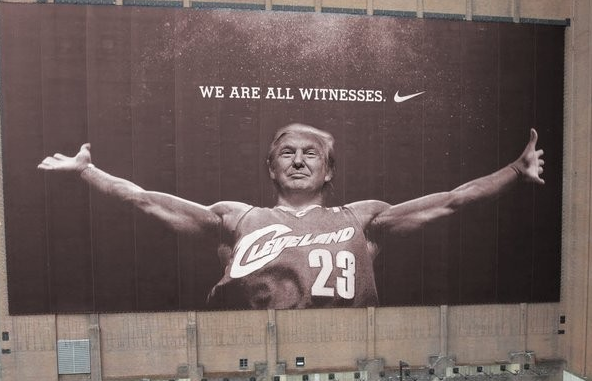