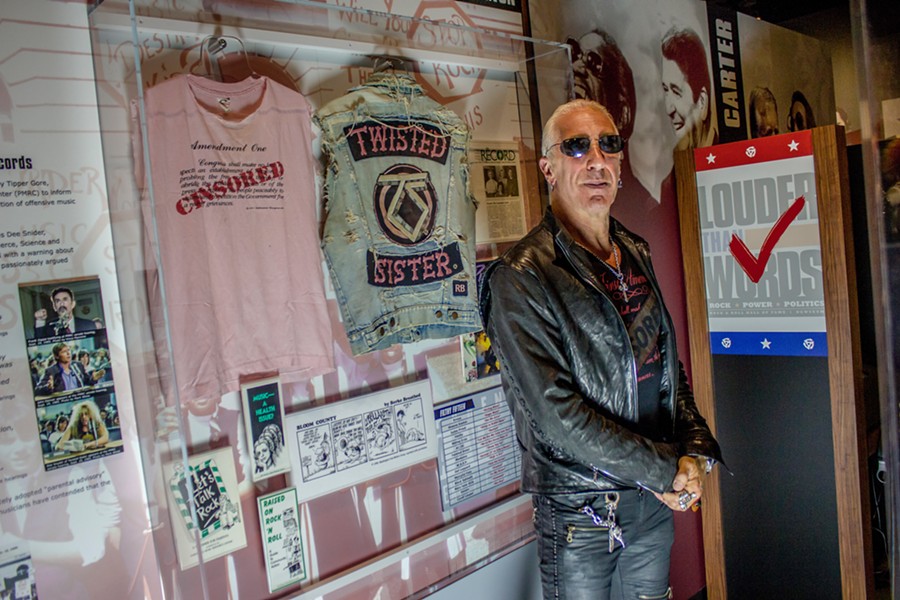 “As the world’s eyes focus on Cleveland, it’s the perfect time for us to explore music’s powerful role in politics,” says Greg Harris, president and CEO of the Rock and Roll Hall of Fame in a press release. “‘Louder Than Words’ highlights how artists have used rock and roll as a platform to express their views and shape public opinion from Aretha Franklin and Bob Dylan to Lady Gaga and Kendrick Lamar.”

During tonight’s opening event, Twisted Sister’s Dee Snider will perform an acoustic rendition of the band’s hit “We’re Not Gonna Take It.” In 1985, he testified before the U.S. Senate during a hearing on censorship. The clothes he wore to the Senate hearings are on display.

“That was my business suit,” says Snider, who was at the Rock Hall this morning doing interviews in advance of tonight’s opening event. “You might wear a suit and tie, but that’s what I wear — a cut-off T-shirt and a cut-off jacket and a pair of pants so tight you could tell I was circumcised. I look back on the young me, and I’m not sure I could do that again. But I’m glad that I did. I’m proud of myself for being myself. People still walk up to me and shake my hand and say, ‘Thank you.’ To this day, politics and rock 'n’ roll go hand in hand whether it’s Beyonce or Kendrick Lamar. Music has been the voice of people’s frustrations.”

Presidential candidate Donald Trump, whom Snider considers a friend, initially used "We're Not Gonna Take It" as part of his campaign. But Snider put an end to it when Trump started to state his more extreme views.

“Three months into it, I told him, ‘Dude you gotta stop – I didn’t know you were going to go down this road,’” says Snider. “He stopped that night and hasn’t used it since. I don’t think most people expected some of the things – the wall and these archaic ideas. He talks about making America great again — are we talking about the '30s? My 'great' was Bill Clinton and the ’90s. I’m a little concerned about what era he wants to go back to. I don’t think we want separate water fountains again.”

Other items on display include the following: Jimi Hendrix’s “Star Spangled Banner” Fender Stratocaster from Woodstock; John Lennon’s acoustic guitar from the 1969 Montreal and Amsterdam “Bed-ins for Peace”; correspondence between the FBI and Priority Records regarding N.W.A’s 'Fuck Tha Police"; original handwritten lyrics from Bob Dylan’s "The Times They Are a-Changin'," Chuck Berry’s "School Day," Neil Young’s “Ohio,” Bruce Springsteen’s “Born in the U.S.A” and Green Day’s “American Idiot”; original Village People stage costumes; and artifacts related to the Vietnam war, the May 4, 1970 shooting at Kent State, the fall of the Berlin Wall and the #BlackLivesMatter movement.