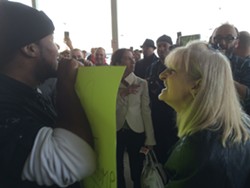 That's Paul Burton, a retired British commando, briefing reporters in Washington DC recently on how to survive their upcoming trips to Cleveland for the Republican National Convention. He provided tips on how to stay safe when surrounded by marches and protests. For instance: “Don’t wear black. You don’t want to look like one of those anarchist photographers.”

The New Yorker takes a look this week at how reporters' jobs are sure to change in a Trumpian American. Burton, whose CV includes stints in the invasion of the Falkland Islands and British operations in Northern Ireland, recently designed a course" specifically for reporters heading to Cleveland and Philadelphia this summer. (We're assuming the Philly class is more directed toward how to find the city's best cheesesteak, rather than how to avoid an on-screen argument with someone named Skiz over the legacy of welfare reform.)

“Trump’s supporters have been primed to be aggressive,” Burton told the five journalists (all of whom asked to remain anonymous), in a warehouse north of town. They had each paid $1,195 to take the course. A bookshelf next to Burton contained titles on ballistics, dirty wars, and battlefield medicine. He went on, “We’ve got a feeling something may happen, especially if Trump doesn’t get what he wants.”

Burton clicked through some photographs projected on a wall and paused at an image. “What do you think of that one?” he asked the journalists. It showed the husks of two burned cars on a street in Baltimore, in 2015, following the death of Freddie Gray, with police in the foreground and protesters in the background. “Are we safe?”

A cameraman with curly hair spoke up. “I was about fifty feet behind that. It was not a safe place,” he said.