"Top Girls" Puts On Its Power Suit at Mamai Theatre 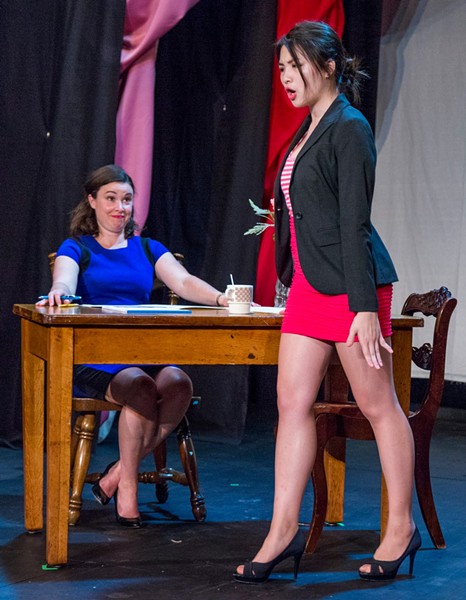 Anyone wondering whether Caryl Churchill’s celebrated work, written in 1982, is still relevant today will have their answer by the start of the iconic opening act.

Premiering at London's Royal Court Theatre in an era marked by Margaret Thatcher’s unrelenting approach to leadership, Top Girls remains a sharp, modern commentary on gender and class today. In Mamai Theatre’s hands, it brings diverse voices to the table, quite literally.

Savvy businesswoman Marlene (played with staggering confidence by Lisa Langford) has just been promoted to the managing director of a recruiting firm. To celebrate, she hosts a dinner party of five successful women from across generations, including some fictional, such as the subject of the painting "Dulle Griet" by Pieter Breughel and Patient Griselda from Canterbury Tales.
But past their prestige, the truth begins to unravel. Lady Nijo (Anne McEvoy) speaks of her rape. Others talk of being married off as teenagers. Heated conversations about materialism, religion, pregnancy and family inevitably ensue.

Mamai makes no constraints to the absurdity of it all, allowing the lively, over-the-top banter amongst them to become a push-and-pull of both laugh-out-loud hilarious and heartbreaking. Fantastical as it all might be, their words sting with reality.

Director Jaime Bouvier, who also navigated the waters of women’s issues in Cleveland Public Theatre’s Drowning Girls, reins in what had the possibility to be either compelling or cluttering with grace. The same applies to the control of the play’s non-linear time travel as it meanders between the dinner, Marlene’s office life and a flashback to her past.

Outside of Marlene, every cast member assumes two to three other roles. This can be cause for some confusion between quick, snappy office scenes, but smart costume changes make for smoother transitions. And in 2016, aren’t women expected to take on at least a dozen more roles between the office and the home?

There can be hurdles when performing a play so well recognized for both its opening and closing acts, and those mainly revolve around making everything in between move. Luckily, the skills of each actor as they morph into multiple characters are enough to carry the audience’s intrigue.

Amy Schwabauer, whose gender-bending was a force in Theater Ninjas’ Tingle-Tangle, commands humor with the raise of an eyebrow and the guzzle of wine bottle as Pope Joan, a woman who disguised herself as a man to become a religious leader. That is, until she blew her cover by giving birth and was dragged into the city and stoned to death.

Mamai’s name comes from the Gaelic word meaning “mother,” and it’s without surprise that these contradictions of womanhood and motherhood come up often. Lady Nijo can’t let go of the children she was forced to give up because they were born female. Patient Griselda (Cassandra Miller) explains without batting an eye that she gave her children away because her husband of royalty demanded it of her, and she must never question his wishes.

Perhaps the most complicated relationship of all is Marlene’s with her sister Joyce (Schwabauer) and Joyce’s daughter (Miller). As an unexpectedly single parent who balances four jobs in her hometown, Joyce doesn’t hold back on giving Marlene much-needed perspective on working class self-sacrifice.

But at Marlene’s present-day office, little bundles of joy also give way to the lingering question of, “Can a woman have it all?” that simmers throughout Top Girls. When mousy Leanne (Courtney Brown) comes in for an interview and says she’s saving up to get married, Marlene quickly advises her to never mention the fact because the person the company is replacing left to have children.

When it feels as though Marlene is projecting her own inner laments about her loneliness, it’s even more amplified when coming from an actress as assured as Langford.

While Marlene’s narrative may take a backburner at times, audiences will see pieces of her own trials and tribulations in each office scene where others take the lead.

A young job prospect struts into her interview sputtering buzzwords in attempt to fit into the shiny new ideal of what it means to be a woman in business. One older job prospect comes to the company because she’s tired of seeing men promoted above her.

Despite Marlene’s cool, tough as nails façade, she’s not immune to these games of office politics. We see her reach a breaking point when Mrs. Kidd, the wife of a co-worker, appears in an attempt to persuade her to give her new promotion to her husband. After all, he has a wife and three kids to provide for. “You’re one of those ballbreakers,” Kidd snarls. “You’re going to end up miserable and alone.”

A surprise visit from Angie leads her back to her sister’s home, where Mrs. Kidd’s words echo louder than ever in a scathing, but passionate, performance by Schwabauer.

The further Marlene climbs the ladder, the more we see what she’s given up. Three decades after its conception, Mamai’s vision of Top Girls is an intimate look at the often unexamined space between “leaning in” and what we’re asked to leave behind. It’s as timely as ever.