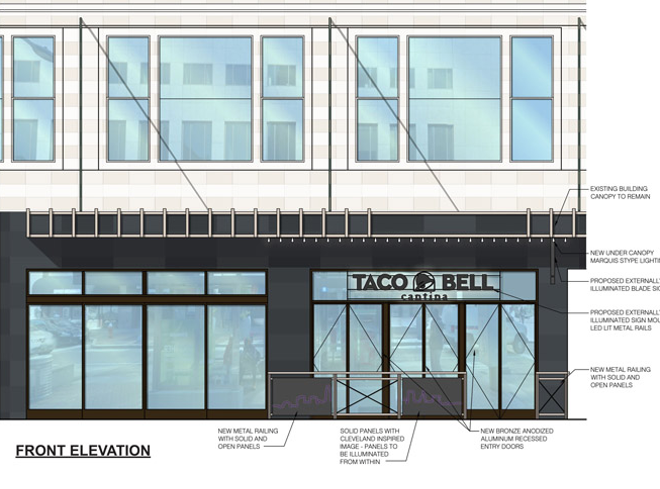 As part of it push to open 2,000 new restaurants by 2022, Taco Bell is changing its own playbook. In addition to unveiling four new bold restaurant designs, the fast food chain is making a strong play on high-traffic urban locations, a largely untapped market for the brand.

But the biggest surprise came when the chain announced plans to launch a new concept called Taco Bell Cantina, starting in Chicago and San Francisco in the past year.

According to Taco Bell, these urban concept restaurants have five things in common that differentiate them from standard Taco Bells: décor, localized artwork, open kitchen layout, open plating and shareable menus. Additionally, Cantina restaurants serve alcoholic beverages, which can include beer, wine and sangria. Yes, the place where you tend to go after drinking now wants you drinking there.

Those two markets came online last fall and plans were tentatively announced for expansion in other cities.

Well, folks: Cleveland is in line to get one, an opening earmarked for the old Cadillac Ranch space on Euclid, if approvals go through. The rustic modern style features reclaimed wood, corrugated metal, brick and glassy, open kitchens.

“It’s no longer one size fits all,” stated Deborah Brand, VP of Development and Design at Taco Bell Corp, in a release on the Cantina concept. “Consumers are looking for a localized, customized and personalized experiences that reflect the diversity of their communities – the flexibility in bringing these four designs to life gives us just that.”

The city's Landmark Commission will discuss the plans and application for a certificate of appropriateness tomorrow (June 9). No official word from Taco Bell on estimated time of arrival should the green light be given.