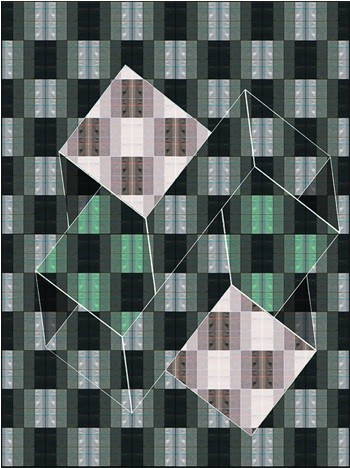 When Lauren Davies moved from San Francisco to Cleveland to open her gallery in the former home of William Busta Gallery, she promised to showcase artists from both cities. Continuing that promise, 2731 Prospect begins its summer season with two new exhibitions, Michelle Murphy’s Shimmering Schemata and Perpetual Sunset, featuring new work by Brandon Juhasz, Aaron Koehn and Erik Parra. 2731 Prospect hosts an opening reception for both exhibitions from 6 to 9 p.m. this Friday, July 17.

“I am really excited about the combination of these two challenging and engaging exhibitions,” says Davies. “Michelle Murphy’s solo show Shimmering Schemata is featured in Gallery One and Gallery Two features Perpetual Sunset with new print media works and paintings by Brandon Juhasz, Aaron Koehn and Erik Parra. Both shows present works that combine colorful eye-popping visual appeal with thoughtful socio-political observations that comment on the absurdities of contemporary consumer culture.”

Photographer Michelle Murphy makes her return to Cleveland for her first exhibition since beginning her MFA studies at the School of the Art Institute of Chicago. Murphy’s photography explores issues of “female identity, beauty, consumerism and our collective relationship to the media.”

“Photography is present in my work both literally and conceptually,” Murphy explains. “I am seduced by its ability to experiment, exploit, to reveal. It is these functions of photography and its chokehold in how we view ourselves through the Media that lead me to work in the medium…When you stare at something closely for a long time, it dematerializes losing its original significance and gains significance in new ways. If we surrender to the images as only formalist works of art we become lost in the lines, the texture, its metallic luster, and its play with scale. The makeup is no longer the subject; the viewer can escape into stardust or to simply scan back and forth over a flattened space eliciting nothing more than shapes, grids, or metallic gradients.
It is the intersection between working formally and conceptually that interests me most.”

Brandon Juhasz earned his BFA from Bowling Green State University. He’s had solo exhibitions all over the place and plenty of shows around town. Juhasz also worked with Lauren Davies to organize Foreign Exchange, the gallery’s first international juried exhibition this spring. Juhasz appropriates imagery he finds online by altering the images, printing them out out, cutting and shaping the paper into new compositions loaded with intriguing implications.

“This body of work comes from the exploration of possibilities,” Juhasz explains. “For contemporary culture photography exists in a very different realm now. It is malleable and fluid. Ownership is blurred as photos are snapped, edited, altered and constantly re-contextualized through forwards, shares and posts. My photographs are a reflection of how images are used and shared. With these expanded rules, frameworks and functions, new possibilities for image making are happening.”

Aaron Koehn’s extensive studies include Drawing and Architecture at Indiana University, Studio Art at Augsburg College in Minneapolis, Architecture at the University of Minnesota (also in Minneapolis) and post-baccalaureate studies in Painting. He was born in Cleveland in 1983, but now lives and works in New York City. Like Juhasz, Koehn finds inspiration in everyday imagery found throughout our materialistic culture.

“Seeking ownership and authenticity in stock imagery, attempting to find individuality and uniqueness in something that, by design has none,” Koehn reveals of his work. “The glue of reflexive continuity is found in the works materiality and its reception by the viewer. A feeling, not a meaning. Finding irony and humor in corporate branding and consumer syntax. Everyday becomes a still-life.”

Erik Parra lives in San Francisco, where he collaborates on Fivepoints Arthouse, an artist-run alternative exhibition space. Born in El Paso, TX, Parra earned his MFA in Painting from the University of Wisconsin after receiving his BFA in Painting from the University of Texas at Austin. His work has been exhibited in Boston, Chicago, New York, Berlin, London and the Museu de Brasilia, among others.

“We hope Clevelanders will turn out in force to support some of our most talented artists before they are lured away elsewhere,” says Davies.

Both shows remain on view through July.