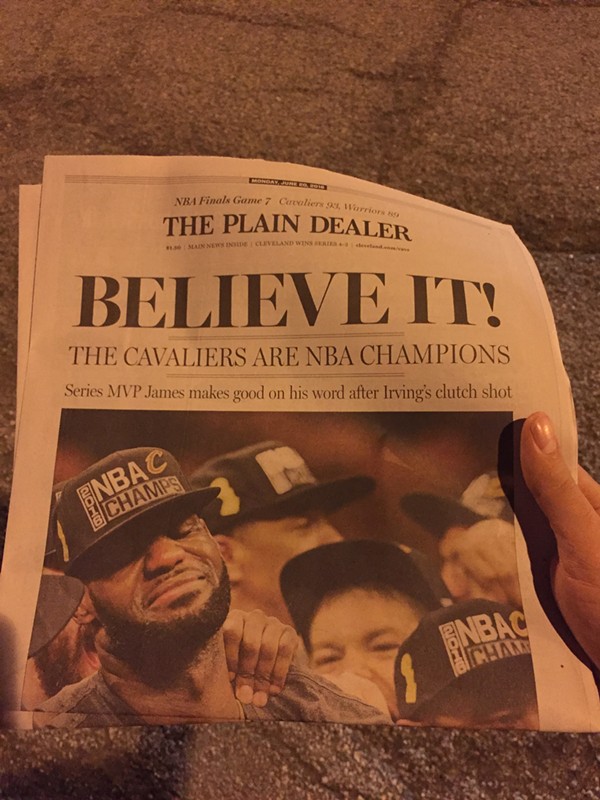 Like a lot of Clevelanders fueled by adrenaline in the Game-7 aftermath, I couldn't get much sleep Sunday night. This had nothing to do with the vamping car horns and everything to do with my own repeated requirements of confirmation that I was not in some extremely high-def dream. And so at 2:15 a.m., responding to a tweet I'd seen earlier in the night, I hopped in the good old Dodge Avenger and high-tailed it to Tiedemen Road to commune with my kind of fans: those who were prepared to drop big bucks on print copies of The Plain Dealer, and preferred to purchase their copies hot off the press.

Plain Dealer will have sales truck outside production facility at I-480/Tiedeman Rd at 2:30am. "Hot Off the Press" special editions on sale.

The Plain Dealer production facility is in Brooklyn, a burg that for personal reasons I associate only and entirely with its ice rink. The big white THE PLAIN DEALER lettering is rather the jewel of the I-480 stretch between 176 and I-71. But driving on highways seemed somehow sacrilegious at this wee and godly hour, because at every intersection, cars erumpent with revelers honked and processed onward or homeward. Or aimlessly, for all I knew. Every car appeared to have about eight people inside, or more like attached. With limbs sashaying from windows and open doors, the cars resembled nothing so much as drunk and gay-appareled octopi.

Drifting southward, down W. 117th toward Memphis, the traffic thinned. But one powerful realization was how rare it is to see all but one pump occupied at a remote Gas USA at 2:30 in the morning.

When I arrived at the production facility parking lot, off W. Biddulph, a handful of cars were already there. Folks made their pilgrimages from their cars to the PD truck, where a jovial man sold copies for $1.50 a piece. "Ohio's Sports Powerhouse," the truck broadcast.

Under the tridential glow of a streetlight, THE PLAIN DEALER signage, and a moon almost full, the faces in the lot were visible to me as almost prayerful. There were no whoops or cheers. The transactions were efficient, clipped. A security guard monitored the proceedings. The gentleman ahead of me bought four copies, which sounded about right, so I did the same. (Two friends texted Monday morning asking if I might be able to procure copies on their behalf).

Front page headline: "BELIEVE IT!" with a massive photo by the PD's own Gus Chan below, featuring LeBron holding the golden Larry O'Brien trophy and wearing a face that seems at once ecstatic, satisfied, and at peace. A note: the papers were not literally hot off the presses, but the ink seemed somehow slicker, the paper as crisp and smooth as brand new dollar bills.

When I skedaddled from the lot a few minutes later, there was only one car remaining. But two cars pulled into the lot as I pulled out. And word from the the PD's graphics editor was that at 7:45 a.m. (and then again at 10:45 a.m.), people were still there, standing in line to get their copies.

This is still happening https://t.co/tCci0vDG1m

I remember reading, with glee, The Plain Dealer's daily headlines during the Indians '95 and '97 playoff campaigns. And more recently, I've taken to collecting the Cavs'-themed front pages. (I had the famous "Gone" front page in my bedroom for a painful few years). Beyond the fact that we still depend on the front page to reflect and cathart our regional mood, copies of the newspaper on days after momentous events are literally collector's items — now more than ever in the era of three-day-a-week delivery, when the subscriber's median age (I'm guessing) is 68.

I do love how we all still gather around the totem of the front page at important moments. https://t.co/DqfkGp6C5s