Solstice is Centerpiece of Terrific Weekend at Wade Oval 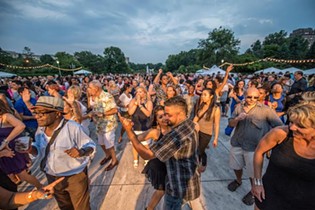 Although the Cleveland Museum of Art’s Solstice is sold out, there are still plenty of opportunities to celebrate during the CMA’s Centennial Festival Weekend. Throughout the weekend, dozens of local artists will be showcasing their studio practices around Wade Oval, and after Saturday night’s Solstice, the Cleveland Orchestra will perform around Wade Lagoon on Sunday evening.

“We’ve had so many extraordinary musical artists from around the world at Solstice, and this year is no exception,” says Tom Welsh, director of performing arts. “But what’s really exciting is that we’re expanding that energy across the entire weekend with even more music and more opportunities for great experiences in the museum. What a great way to set the tone for the next one hundred years.”

Saturday night’s eighth annual Solstice takes place from 8 p.m. to 1 a.m. One of the most highly anticipated events of the summer in Northeast Ohio, the event features two stages showcasing musicians from around the world. The South Terrace Stage is located outside the museum, and the Atrium Stage is located inside the CMA’s gorgeous glass atrium. Other highlights include Jeremy Bible’s Unveiled/Extension sound installation in the museum’s East Glass Box Gallery, various performances, Luisa Maita, art-making opportunities, guided tours and video art in the Atrium.

Again, Solstice sold out again this year, but there’s plenty more to enjoy throughout the weekend.

In honor the CMA’s year-long, centennial celebration, painters, sculptors, printmakers, mixed media artsits and writers will be stationed in pop-up studio spaces around Wade Lagoon. During the weekend, museum visitors will have rare access to the engage local artists during their creative process. Artists will be creating original works of art from 10 a.m. to 5 p.m. on Saturday, June 25, and 11 a.m. to 6:30 p.m. on Sunday, June 26 (museum hours are noon to 5 p.m.). Throughout the weekend, large-scale art installations, music and special performances from the Hallucinogenic Pachyderms, as well as guided tours throughout the museum’s permanent galleries, will augment this unprecedented exciting event.

"The Centennial Artists Village is a first for the Art Museum and a first for Cleveland,” says Robin VanLear, director of community arts. “For me, the anticipation of it unfolding is a little like waiting for Christmas. This, however, brings me even more to look forward to: 24 mini studios lining the lagoon, each containing the surprise of an individual artist sharing their working style and techniques with anyone who has the desire to visit. What could be better?”

She adds: “In addition to the mini studios, the Centennial Artist Village will feature eight plein air artists and three installation pieces commissioned specifically for the centennial celebration. Two of the installations (by Penny Rakoff and Micheal Costello) are variations on two works that were created for the museum's 75th birthday - newer, bigger and better. The third installation by Ian Petroni will transform from day to nighttime. The entire weekend is designed to introduce Clevelanders to the amazing talent pool of artists who make our city such a great place to live and whose creativity often goes unnoticed.”

“It's a great pleasure for us to help our friends at the Cleveland Museum of Art celebrate their centennial,” says Brett Mitchell, Associate Conductor of The Cleveland Orchestra. "The five pieces on our program all feature intimate connections between the worlds of visual art and classical music, with two of the composers having visited and performed at the CMA during its first hundred years.”
Sunday’s concert is the weekend’s grand finale, and is free and open to the public. Created to provide connections to the visual arts and the summer solstice, the concert will feature works by Bartók, Hindemith, Mussorgsky, Respighi and Adam Schoenberg under the direction of Cleveland Orchestra Associate Conductor Brett Mitchell.

“Béla Bartók and Paul Hindemith, two in a long line of artists who performed in the museum’s longstanding concert series, both visited the Cleveland Museum of Art, either performing or giving lectures,” organizers stated in an official press release. “The Hindemith, Respighi, and Adam Schoenberg works were inspired by the visual arts and the Mussorgsky work has a connection to the summer solstice.”

In anticipation of large crowds on Sunday, the museum intends to provide 3,000 chairs and some lawn space for additional seating. Organizers encourage guests to arrive early and to check clevelandart.org for parking information. They also encourage exploring alternative transportation options like RTA, bike, Uber, etc.

“Having The Cleveland Orchestra perform the finale of our Centennial Festival Weekend is about the greatest birthday gift I think we could ever imagine,” Welsh says.

It also sounds like a pretty perfect way to cap off the city’s championship weekend.