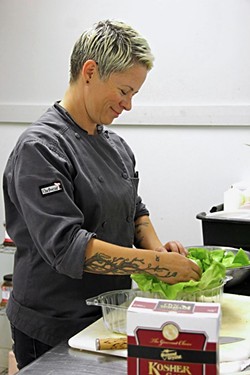 Update: Salt is open now, if you hadn't noticed or heard, and has been for a couple of weeks.

(Original story 6/29/16): As chef Jill Vedaa guides this writer around her soon-to-open restaurant, her excitement is evident and contagious. After 20 years of cooking professionally for other owners (at Bohemia, KeKa, Lola, Flying Fig, Rockefeller's, Black Pig), Vedaa finally has the opportunity to be her own boss, design her own space, and draft her own menus. When it opens in July, Salt (17621 Detroit Ave.) will be the culmination of countless hours of blood, sweat and blisters.

Since February, Vedaa and business partner Jessica Parkison have been transforming the former Pug Mahones space, a large triple storefront just east of the Beck Center, into a hip and breezy 75-seat bistro. A large horseshoe bar was demolished and replaced by a smaller bar and lounge, with seating for about 25. The dining room will seat an additional 50 guests at tables and booths, including a dramatic corner booth that will seat 8 to 10 diners on a raised platform.

From her open kitchen at the rear of the open dining room, Vedaa will prepare seasonal small plates that she describes as "composed,” because they incorporate more than a single item as is often the case with traditional Spanish tapas.

“Tapas kind of pigeonholes me into Spanish influence and as you know, I pull inspiration from a lot of different ethnic cuisines,” she says. “I want to be able to create dishes that are as whimsical as I’d like.”

Salt’s menu is divided into categories for vegetables, fish and meat, with five to seven items in each. The chef’s creativity and knack for juxtaposing complementary flavors is evident in dishes like smoked beets with honey, hazelnuts and feta, and a braised octopus dish plucked from the sunny Mediterranean paired with olives and oranges. Other fish entrees are built around smoked trout, shrimp and calamari. Meat dishes range from a pork pie with chimichurri to short ribs with housemade kimchi.

Salt’s motto is “experience food again,” and Vedaa feels strongly that despite their often checkered history in Cleveland, small plates are the best way to dine.

“It’s how me and my friends like to eat,” she says. “I want to try a little bit of everything, I like sharing food, and I like to keep my palate excited. When I see a giant plate of food, I immediately get defeated and end up leaving half of it on the plate.”

Vedaa says that eating at Salt will be a very “service-driven experience,” with servers (and the chef) spending time with diners to go over the menu. These are plates built for pairing and sharing, and guests will be encouraged to continue ordering throughout the meal. And with dishes priced between $5 and $13, the more the merrier.

“You don’t have to spend $30 to try and be full,” she says. “You’ll get a chef-driven meal that’s made from scratch and you’ll be able to try a bunch of different things.”

The bar will offer three local draft beers and all the cocktails are named after “bad-ass historical women, my mom and Jessica's grandmothers included,” says Vedaa.

The menu offers the following statement regarding the name: "Salt... the only rock we eat... has made a glittering, often surprising contribution to the history of humankind."

Look for Salt to open before the end of July.