Who's the Dick Behind the "Dick to Dick LLC" Billboard on Carnegie? 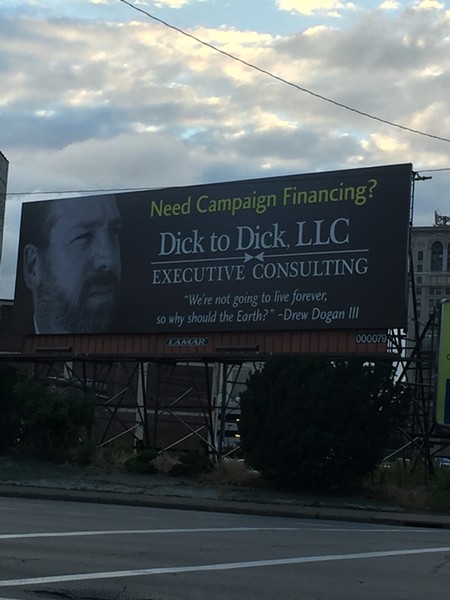 Drive by the intersection of Carnegie and East 18th and you'll see this billboard.

"We're not going to live forever, so why should the Earth? - Drew Dogan III"

What's all that about? The smarm, the straight-from-stock-photo lawyer shot, the dire language?

Google Dick to Dick LLC and you'll find its website, which leads with this introduction: "Destroying the world and humanity for personal gain is a monumental endeavor. Dick to Dick LLC provides the professional and technical expertise necessary to ensure nothing inhibits your abi

lity to succeed. Whether it's hiding scientific data, covering up hundreds of deaths, or "donating" to a politician or judge so you can change a law, Dick to Dick LLC is there for you. At Dick to Dick we believe that life is not about money, it's about hoarding money you didn't earn at the expense of others. Contact us today!"
Alright then, but who the hell dreamed this up and why? We're here to help.

Our sister paper down in St. Louis, the Riverfront Times, caught up with the guy behind the Dick to Dick LLC brand last year after a similar billboard popped up on Highway 40. That man's name is Andrew Farrington, a 40-something independent financial consultant in LA.

Farrington had been working in finance and the music business, but grew disillusioned with the inequity he saw in his working life. Regular schlubs who made mistakes got canned, while the people at the top got golden parachutes.

The financial devastation of 2008 was particularly tough to watch. Farrington had always believed that hard work would be rewarded. He put himself through college and went to night school, earning an MBA and toiling long hours to provide for his wife and children. But he realized it just wasn’t so, and had a panic attack.

“It was my wife that actually said, ‘You can either care less, or find an outlet,’” he says.

So he cashed out a portion of his 401(k) four years ago, using half on his undergrad debt and half to get Dick to Dick off the ground. The production values of the videos and websites clearly required some cash, and the spots ran on basic cable in Los Angeles, which required more. He had a lot of help from friends, but it was still an investment with absolutely no financial return.

The basic message is to get people to question the ways big businesses work and how they protect the biggest fish, and to contemplate how people stay trapped in jobs because they need to make a living.

“I’m just voicing my frustration with living in America,” he says. “I’m trying to raise kids.”

There are even (well-produced) commercials for the brand. Here's one:

Anyway, if you're wondering, it makes sense, with America's microscope coming for Cleveland and the RNC in a couple of weeks, that Farrington has brought his frustration to a billboard sure to be seen by many.