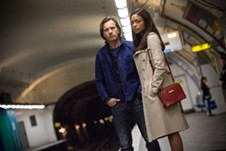 From The Godfather trilogy to Goodfellas, mafia movies have proven time and time again to be a success. Love and violence have a way of intertwining together in the creation of a full-bodied narrative that’s amplified in Our Kind of Traitor, now playing at the Cedar Lee Theatre.

Our Kind of Traitor is a riveting thriller that proves equally profound as it is entertaining. In place of the stereotypical Italian mafia that is often depicted, the Russian mafia takes over, providing a lens into an underexposed culture.

Commencing with an unexplained murder in Russia, Our Kind of Traitor cuts to a scene in Marrakech where an ordinary couple, Gail (Naomie Harris) and Perry (Ewan McGregor), appears to be enjoying time away from London together. From here, the film escalates into chaos when the they befriend a charismatic Russian, Dima (Stellan Skarsgård), who prays on their innocence. A kingspin money launderer for the Russian mafia, Dima desperately asks Perry to take back information to the British Secret Services upon his return to London in the hopes that they will provide Dima and his family safety from the mafia in London.

And for reasons unbeknownst to the audience, Perry agrees to help this dangerous man he hardly knows. With skilled directing by Susanna White, the film never slows down long enough for you to question why Perry decided to help a member of the mafia. The torrential, high-speed downpour of events becomes a riveting narrative of several players caught up in a bad situation. Between Dima fighting to protect his family and Perry fighting to protect Dima, the film undoubtedly attempts to trace the intricate nature of relationships; however, it fails in that there is no ground for these relationships to stand on.

Perry and his wife, Gail, get caught up in this grand operation to get Dima and his family to London safely; they go from Paris, Bern to the French Alps all in an effort to protect this Russian family they hardly know. Why do they do it? Out of kindness? It’s farfetched to think anyone would voluntarily help a criminal find refuge in their country, but then again, it isn’t that farfetched at all.

We repeatedly see and hear of people getting sucked up into a culture that is not their own, and Our Kind of Traitor depicts just that. It perfectly paints a hauntingly real picture of how easy it is to get devoured by an unfamiliar world; through the strong narrative, mesmerizing performances and skilled editing, Our Kind of Traitor provides a frightening lens into a world that anyone could easily stumble upon.