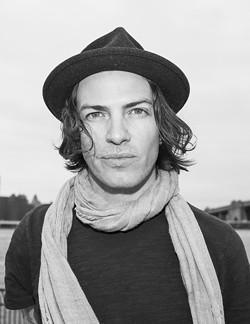 A Chardon native, singer-songwriter Clarence Bucaro, who lives in New York by way of New Orleans after a stint studying political science and natural resources at Ohio State, thanks his brother for his interest in music.

“I always gravitated toward music since I was really young,” he says. “The thing that led me into it was that I had an older brother who would travel around on his motorcycle and play music. He plays guitar. I always wanted to be like him. I emulated him. My family was always musical. My sister plays classical piano and my dad is a radio DJ. I was always around music.”

Back in 2002, Bucaro, who performs at 8:30 p.m. tomorrow with opener Ray Flanagan at the Beachland Tavern, released his debut, Sweet Corn, through the indie imprint Burnside Records.

“That experience was wonderful with Burnside,” he says. “I was 19, and I didn’t know anything at all. I remember sitting on the living room floor here and putting out the packages to labels to try to get signed. They were the first ones that came aboard and signed me. I had a wonderful experience with them. Everything started happening. I started touring and I went to Europe. Then, I was on Rounder Records. Since then, I’ve had some bad experiences and some decent experiences. I have European labels, but here I do it all myself.”

Bucaro co-produced his latest album, Pendulum, with Tom Schick (Wilco, Ryan Adams) at The Loft, Wilco’s Chicago recording studio. RollingStone.com, which premiered the track “Strangers,” praises the album, saying “the 10 tracks on Pendulum come to life through Bucaro's intimate literate lyrics and velvet-and-molasses vocals, with the title track capturing the troubling yin and thrilling yang of romantic pursuits.” His soft, evocative vocals sound particularly sharp on tunes such as “Tragedy” and the mid-tempo "Emerald Eyes."

Award-winning documentary filmmakers Micah Garen and Marie-Helene Carleton (Light on the Sea), who founded Four Corners Media and co-wrote the book American Hostage (it documents Garen’s abduction by militants in Iraq and the battle for his release), shot the music video for “Tragedy” near the historic Naumburg Bandshell in New York City’s Central Park.

“It was fun,” Bucaro says of making the music video. “The song is supposed to be this grand dramatic production. I had started the song years ago and then put it away and just finished reading Oscar Wilde’s Dorian Gray, and it mentioned this scene from Hamlet with Ophelia. I remembered that song. In my head, I had these visions of Shakespeare scenes and everything. I didn’t have the budget or resources to film something like that."

But in Central Park, he found a terrific setting that lent itself well to the video.

"Central Park has this great area with this big stage, and there’s lots happening," he says. "There’s people busking and doing plays and getting engagement photos taken. We went with whatever we saw. We just followed whatever was going on and there was plenty. It was very fun. I enjoyed the process. I don’t consider myself good at that aspect of it all — the videos — so it was nice to have it be spontaneous and go on a whim instead of trying to lipsync and look natural.”

Often compared to classic singer-songwriters like James Taylor, Van Morrison and Paul Simon, Bucaro says he doesn’t entirely think of himself as a throwback.

“I certainly get where those comparisons come from,” he says. “Those are my idols and the people I grew up listening to. I go back to that stuff as a monument of what really good stuff is. I feel like I’m out of step in general. It’s natural to go back to the Jackson Brownes and the James Taylors. I like to think I’m modern, but I’m not sure. There are the artists you emulate, and then there’s your original sound. You want it to be obvious where you come from but not seem like you’re just imitating. I think it’s clear who my influences are. I think that’s somewhat accomplished. I’ve always gotten that Paul Simon thing because he has such a thing for adding a sound. I do that in the studio and then I worry that I’m going to the Paul Simon place.”

Bucaro says he has a “fun summer” ahead of him.

“I’m doing different stuff, and I have my family traveling with me,” he says. “That’s super fun. I’ve never done that before. We’re doing stuff in Chicago and Ann Arbor and Cleveland and then to Italy for a two-week tour and then when I come back from that I have a tour with Tony Joe White. It’s going to be great.”