This is what the North Coast harbor pedestrian bridge was supposed to look like.

It was designed by bridge savant Miguel Rosales, the same dude behind the huge "iconic" Cleveland Pedestrian Bridge (the so-called "Bridge to Nowhere"), and it's been nixed, at long last, by the City of Cleveland due to a preponderance of foreign parts which would have made construction too expensive. The PD's Steven Litt's got the scoop and the deets here.

Instead, Cleveland will get a version of the clunky drawbridge below, which the Planning Commission approved in May. 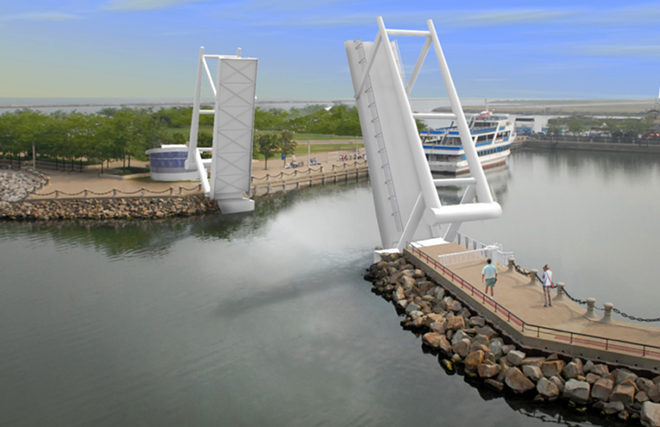 Gadzooks! The bridge will not, thankfully, be composed entirely of PVC pipe and the same white chubby ringlets of the Michelin man, but it's nonetheless a boxy design (courtesy of Cleveland's own CDM Smith) that recalls dentistry a lot more readily than it does anything else.

Here's the bridge in its prone position:

Given the amount of time it's taken to get this far — a $4.5 million federal earmark was approved 13 years ago to help fund the project, Litt reports — there should be plenty of time to refine the design. Officials are throwing out "late 2018" as a potential date of completion, but consider that a placeholder.

The huge iconic Pedestrian bridge from the mall to the North Coast Harbor, the so-called "Bridge to Nowhere," is still very much in play. Litt reports that the Group Plan Commission, the same group that raise all that money for Public Square is trying to wrangle dollars over and above the $25 million already committed by the city, the county and the state.

CLEVELAND: GIVE US ICONIC URBAN DESIGN OR GIVE US DEATH!!!!