Tiny Houses Are Dumb and I Want One 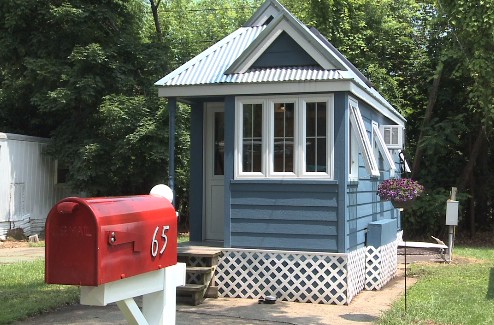 Tiny houses are dumb and I want one. I desire a tiny house because I’m a human female of childbearing age and HGTV is always playing on the TV at my gym. HGTV is more than just a cable channel devoted to convincing every homeowner in America that any house without an open floor plan, white kitchen cabinets, gray walls, and turquoise throw pillows should be torn to the ground – it’s also dedicated to identifying any spark of new home trend and pouring gasoline directly on it. Tiny Houses are a fairly new trend, and the HGTV show “Tiny House Hunters” is the gas can.

I’ve watched more than a few episodes of “Tiny House Hunters” while half-assing my 30 minutes on the elliptical machine, and in each episode I am thoroughly taken in. I really enjoy watching people with perfectly good regular-sized houses search for the perfect tiny home. I love watching them visit a variety of tiny houses and remark, over and over again, that they’re “really small.” I live for the questions, “Is this really the size of the shower?”and “What do you mean it doesn’t have a dishwasher?” and, “Do you think we could squeeze a king sized bed in here?” Because the thing about tiny houses are they involve a certain amount of sacrifice. You have to heavily curate the few personal items you’ll move with you into a tiny house, and you won’t be able to easily acquire new things.

Now the tiny house movement has come to Cleveland, as two brand new tiny homes have been built on the Detroit Shoreway as part of the Citizens Tiny House Experiment. The two tiny houses were unveiled on July 1st – they are each 583 square feet, come with a 15 year City of Cleveland tax abatement, and claim to be able to keep your electric bill below $500 a year. One is currently for sale for $149,900 while the other is slated to become a sought-after Airbnb before going up for sale as well in September.

Tiny houses are appealing on a primal level. It’s like living in a dollhouse, or a tree house, or a fort. It’s like living inside of a childhood fantasy. It’s like living in the nicest college dorm ever. Tiny houses seem to exist outside of real life and real responsibilities. Sure you owe $60,000 in student loans and your health insurance is for shit and there’s cat hair on every pair of pants that you own, but all those problems will be way more manageable if you can just sleep in a loft above your fridge every night.

I can’t live in a tiny house right now because I have a child who requires at least 46 toy trains in order to live. I also currently require a living situation where I’m able to shut out the sound of my cat licking himself. But I still dream of tiny house living – a murphy bed and a pull-out cutting board and built-in shelves and a precarious ladder that leads to the guest room/place where the cat sleeps.

Tiny houses are hot right now because they’re a reaction against the 2008 housing bubble burst. Mega-mansions have been so popular for so long that it seems rebellious to opt for less. These homes push against the idea that a person’s worth should be evaluated based on the amount of square footage they own. Tiny houses maintain the American dream of homeownership while downsizing it to make it more accessible to more people. They’re aimed at people who are active, recent college grads or empty nesters, people who are interested in living most of their day outside and aren’t interested in dusting for more than two minutes.

But is paying $257 per square foot actually affordable? And why are we presenting tiny houses to the public as though they are a brand new, radical housing options? Trailer homes are the original tiny houses, but we don’t celebrate folks who live in trailer homes for being eco-conscious and savvy consumers. There’s a snobbery that causes us to romanticize the tiny house movement as we ignore those who are already living small, either by choice or necessity. Can we rename trailer parks “tiny house communities”? Can we have a “Trailer House Hunters”? Trailer homes aren’t included as part of the tiny house movement because they’re not hand-crafted, artisanal DIY-masterpieces. They are pure, mass-produced, drab function – no hidden nooks, no sunny bed lofts, no reclaimed wooden floors. Tiny houses are made to be looked at and admired, set among larger houses as a gleaming, showy alternative.

Tiny houses may catch on and become mainstream. In doing so, they may save the environment, and they may make home ownership available to those who otherwise couldn’t afford it. Or they may be a quick fad that allows the haves to re-brand and re-purpose a lifestyle that is, for many people, not optional. Either way, they have come to Cleveland.