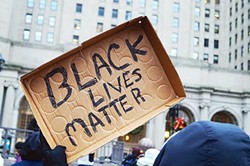 Jeff Mixon has his own way of doing things.

He sits on the executive committee of the Cuyahoga County Democratic Party. But his activist organization has reportedly endorsed U.S. Sen. Robert Portman, the Republican incumbent.

Mixon is president of Black Lives Matter in Cuyahoga County. But his group isn't affiliated with the national network whose name it wears.

"We've posted events on their calendar but they never followed through with the process of making us an official chapter," Mixon wrote, via an email address identified as "Elijah Keen." "We are, however, strongly affiliated with Jesus Christ and are strongly devoted to the cause of realizing a 'just society composed of just men and women.'"

According to his LinkedIn profile, Mixon produces and hosts "The Urban Pundit" radio show. He also claims to be program director of New City, Inc., a "non-profit organization in the state of Ohio." But the New City wasn't listed in the IRS database of charitable organizations.

Nevertheless, the press sees Mixon as a credible source. He's been quoted by the Akron Beacon Journal, as well as by Fox 8 News.

But only the group called Black Lives Matter in Cleveland is actually affiliated with the national network. That group's spokesperson is Latonya Goldsby – a cousin of Tamir Rice – who was curt when asked about Mixon's group.

"This is not our chapter nor are we affiliated with them," Goldsby said in an email. "The Black Lives Matter Network that we represent is not connected with this organization."

Ironically, neither group will play nice when it comes to protesting at the RNC.
The Cleveland chapter reportedly refused to apply for a permit to protest.

"Applying for the right to protest takes away from the spirit of the protest movement,’’ Cleveland chapter organizer Kareem Henton told USA Today.
Mixon's group is boycotting the March Against Poverty, a protest coordinated by several local groups that is scheduled for July 18.

But the Democrats Party Unity Committee would have to determine whether Mixon actually violated the clause – and what kind of sanction he might garner – according to deputy director Lillian Sharpley.