By 5 p.m. Sunday, Green Party presidential candidate Jill Stein had yet to arrive to a 4 p.m. meet and greet in Ohio City, the neighborhood just west of downtown Cleveland.

“Americans deserve real solutions for the economic, social and environmental crises we face," Stein said in a press statement delivered Saturday. "But the broken political system is only making things worse. Itʹs time to build a peopleʹs movement to end unemployment and poverty; avert climate catastrophe; build a sustainable, just economy; and recognize the dignity and human rights of every person. The power to create this new world is not in our hopes; it’s not in our dreams —itʹs in our hands.”

The press release, issued by the Cuyahoga County Green Party, specifically invited Bernie Sanders supporters "and anyone interested in the Green Party" to the event. Prominent socialist activist Cornel West was also expected to attend.

Stein was in Cleveland for the "Convention of the Oppressed" with West. She'd spoken at the Cleveland State University Wolstein Center earlier in the afternoon, and at about 4:30, word in Ohio City — at the architectural offices of David Ellison, a Green Party central committee member and gallant candidate for Cuyahoga County Executive in 2010 — was that she'd been detained for a series of interviews.

Joe Demare, the Green Party's senate candidate in Ohio, tried to stall the crowd of 40-50 Green-registered or Green-curious attendees by delineating his own political philosophies and explaining the key principles of the party — social and ecological justice, chiefly. Though several guests were skeptical that Stein would turn up, Demare said that her interviews were being streamed live on YouTube and were being watched by as many as 2.5 million people.

Other folks in the crowd had been making calculations of their own. In a presidential race where many voters are selecting the proverbial "lesser of two evils," some said that now was the perfect time for third party candidates to make a move. But Chris Keffer, a 51-year-old local who's owned a recording studio in Cleveland for 30 years, had been arguing with other attendees that voting for Hillary in 2016 was a smarter play than voting for Stein.

For Keffer, the most important political issue right now is the Supreme Court, and the expected forthcoming appointments. He said that regardless of what anybody thinks of the two-party system, the reality is that either Hillary Clinton or Donald Trump will win the presidency in 2016, and Hillary will make nominations to the Supreme Court that will benefit the most vulnerable members of the population. Trump's selections to the nation's high court, Keffer said, "would be Draconian."

"It's hard for me because I've got no skin in the game," Keffer said. "I'm a white, middle-class male. But my LGBT friends? My black friends? My female friends? I'm thinking 25-30 years down the road about what's best for them. I respect people voting for Stein, but I think they're doing it emotionally and ideologically. You've got to remember that this is a chess game."

Keffer said he's absolutely in Stein's corner, but he thinks that Stein should mobilize support over the next four years and mount a stronger campaign in 2020.

Before 4 p.m., outside the meet and greet, Keffer's arguments weren't swaying members of a slowly gathering crowd.

One man, Scott Smith, who identified himself as an original Bernie Sanders supporter, said he saw a poll that very morning that said Jill Stein could defeat either Hillary Clinton or Donald Trump in a general election.

Brian Cassidy, a 42-year-old Iraq war vet who's been a registered member of the Green Party in Summit County, (home to Akron), since 2010, also disputed Keffer's logic. He disagreed that a vote for Jill Stein was a de facto vote for Donald Trump.

"There's multiple responses to that," he said. "One: We're not going to vote out of fear. We're going to vote our principles. Two: It's not just a two-person race. Gary Johnson [the Libertarian candidate] is running as well. There are a lot of votes up for grabs. And it's not as if every person who's voting for Jill was going to vote for Clinton in the first place."

Cassidy, who said he'll be marching with Vets for Peace Monday afternoon and who refers to the sitting U.S. President as 'O-bomber', says he doesn't want to consign poor young Americans to fight "wars of imperialism" overseas. Whether those wars would emanate from a Trump presidency or a Clinton presidency wasn't quite clear.

The ethos of the gathered partisans was, in fact, more vocally anti-Hillary than anti-Trump; but more vocally anti-two-party system than anti- any candidate in particular. Several in the crowd wore "Bernie 2016" t-shirts, and much of the chatter centered on the benefits of alternative parties. The crowd was at least two-thirds white, and skewed older. You might confuse them (perhaps appropriately) for a gardening club of some kind.

While waiting for Stein, Brian Cummins, a Cleveland city councilman who had been a Green Party member for 15 years, but who'd re-affiliated with the Democrats for political reasons, took the mic after Joe Demare. He was asked whether or not he wanted to return to the Green Party. 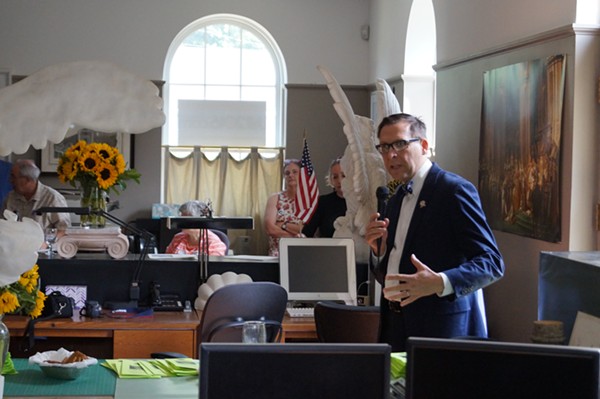 "You know, it's tough," Cummins said. "Even though our [local] races are non-partisan, the partisan politics can be brutal. I've been redistricted twice, and the brute force of the state democratic party targeted me for elimination and I won by less than 20 votes."

Cummins defeated Councilman Brian Kazy in the 2014 election, and Kazy was later appointed to fill the Ward 16 seat vacated by councilman Marty Sweeney. (Cummins actually won by 25 votes, not 20, but it was certainly the slimmest margin of victory in that year's election).

"Coincidentally, when I switched [back to being a Democrat]," Cummins continued. "I became chair of the health and human services committee, and I'm very happy to finally have a leadership role in council to help with those challenges. For absolutely pragmatic and keeping-power reasons, I felt I had to switch back."

By 5 p.m., Stein still hadn't arrived. David Ellison was trying to get various audio speakers hooked up to his office's computers so as to broadcast the Stein / West interview, which was still streaming on YouTube, though appeared to be winding down.

Daryl Davis, another central committee member for Cuyahoga County, confirmed on Monday that Jill Stein never made it to the gathering.

"Stein's campaign office told me that she'd be available and, in fact, that she'd not be going to the Wolstein Center," Davis told Scene by phone. "I'm not sure how that got screwed up. I'm terribly disappointed to have told everyone she wouldn't be coming."

As the crowd trickled out onto Lorain Avenue, the white-shirted stragglers from the "Circle the City With Love" demonstration early Sunday afternoon were still walking West from the Hope-Memorial Bridge. But there was, the news said, another protest on.