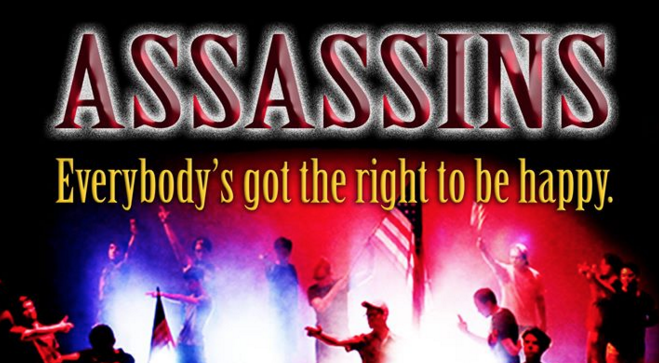 “There’s Another National Anthem, folks. For those who never win . . . for the ones who might have been.” A line from a Trump election advertisement? No, its from the Stephen Sondheim, John Weidman musical, Assassins, now on stage at Near West Theatre.

Assassins seems an ideal script to choose at this time of year, as the Republican convention is in town and there is a general feeling of discomfort and mistrust sweeping the nation. Political conflicts, racial distrust, police shootings, and left/right belief disagreements are running rampant.

Assassins is based on a concept of Charles Gilbert, Jr. It examines, in musical review style, men and women who have attempted to assassinate Presidents of the United States. The musical score parallels the music popular at the time of each President.

Never noted as one of Sondheim’s great musicals, it has some interesting ideas and does contain a signature song, “Everybody’s Got The Right To Be Happy.” The defining song is a common element in Sondheim musicals. Think, “Agony,” Into the Woods, “Tonight,” West Side Story, “Another Hundred People,” Company, and “Johanna,” Sweeney Todd. They keynote a major element of the script.

The musical opened off-Broadway in 1990 and ran only 73 performances. A review stated, “Assassins will have to fire with sharper aim and fewer blanks if it is to shoot to kill.” There have been productions in London and numerous other cities. None of them seemed to have completely dealt with the show’s problems.

There are three different versions of the script (original, London and Broadway). The major difference is the treatment of the song, “Something Just Broke,” which was added for the London production, but dropped from the 2004 Broadway revival. (The Near West Side production includes this song.) Also, in some scripts the Balladeer and Lee Harvey Oswald are blended into a single role. NWS has them as separate characters, alleviating some confusion as to the relationship between Oswald and the Balladeer.

Near West is a family-oriented theatre, with many of the cast members and audience tweens and teens. It is therefore surprising that they chose to do Assassins, which contains mature content, gun use, representations of death and violence, and very strong language. It is bold, disturbing and alarming.

But, director Bob Navis, Jr. decided to put aside the possible negatives, confront the issues of today, accept the language and subject matter of the script, and, the results is that he has staged a winner. The interpretation, singing, stage movements, choreography and, most importantly, the quality of the acting that makes real people, not caricatures, of the assassins, is impressive.

The cast is strong, and considering they are high school and college students, they are nothing short of amazing.

Though the almost two-hour intermissionless play stressed the attention and bladder span of some, the long sit was worth it.