Weekend Before RNC Was Cleveland's Deadliest of 2016 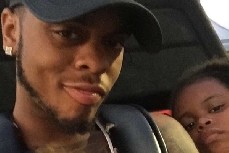 The numbers from Day One of the RNC would seem to tell an encouraging story about safety and policing: There was only one arrest all day long — a local activist was put in handcuffs on Public Square for an outstanding warrant — and despite the 450-500 total protesters at Monday's demonstrations, there were zero violent confrontations.

(Note: Four anti-Trump protesters were arrested Tuesday morning after scaling flagpoles at the Rock and Roll Hall of Fame and hanging a banner. Firefighters arrived on scene to remove it. The Rock Hall responded promptly with a statement promoting safe and legal speech "that doesn't stress our first responders.")

The low incident rate might have something to do with the 5,000 police officers in town: the roving bike brigades, the cavalry, the traffic enforcers, the congenial out-of-state troopers window-shopping on the sidewalks in bands of 6-8. The combined force is more than four times the size of the Cleveland police department, and though they represent only 1/3 of the credentialed media in town and 1/10 of the estimated total crop of visitors, they're an outsized presence in the Event Zone, to say nothing of the extravagantly barricaded Heightened Security Zone.

But despite all this law enforcement, another shocking number should be emphasized: five. That's how many people were killed Friday-Sunday in Cleveland, making it the deadliest weekend of 2016. Cleveland.com reported that at least 20 people were shot over the weekend, and one of the victims was a two-year-old girl.

She's not the first innocent baby to find herself in the crossfire of Cleveland's violence: Three-year-old Major Howard was killed in a drive-by shooting in September, 2015, and five-month old Aavielle Wakefield was shot and killed two weeks later, in another drive-by, prompting police chief Calvin Williams to tearfully plead with Clevelanders: "Enough is enough."

Later Sunday, three people were shot at a Stop the Violence Beach Party and Rally at Sims Park in Euclid, an inner-ring suburb on the city's northeast side. One of the victims, 19-year-old Phillip Banks, was shot in the head and died. Another was only 12 years old.


The weekend violence, coming so close on the heels of police shootings in Dallas and Baton Rouge — not to mention the deaths of Alton Sterling and Philando Castile preceding them — so thoroughly rattled Cleveland City Councilman Jeff Johnson that he has canceled the Glenville Festival and Parade, an annual summer tradition on the east side. It's only the second time in 39 years that that festival won't take place.

Johnson, who called the cancellation a "very difficult decision," wrote in a statement to his Ward 10 residents that this was the first time in his seven years as councilman that he's been this worried about safety:

"I feel that the boldness and randomness of gun violence occurring weekly in Cleveland, including our area, creates too much uncertainty for the safety of citizens and for law enforcement officers and others working to protect us," he wrote.

Cleveland Safety Director Michael McGrath assured City Council back in April that public safety commitments during the RNC would not negatively impact the city's regular policing. In fact, he said, the department had banned vacation days during the convention and would be staffing the city's neighborhoods at a 115-percent level.