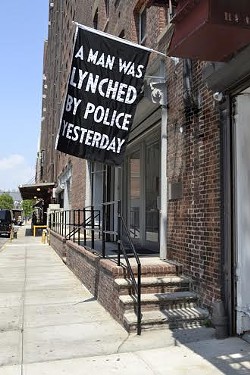 On the final day of the Republican National Convention, radical and groundbreaking artist Dread Scott’s provocative flag, titled A Man Was Lynched By Police Yesterday, will be flying in Cleveland. Thanks to a partnership between SPACES and local poet, musician, artist and co-founder of Guide to Kulchur RA Washington, the flag will be flying high outside of Young Kings in Hingetown, only about a mile and a half from the convention itself.

Young Kings is a new venue founded by RA Washington. The space serves as an incubator and retail space for young painters and streetwear artists. The venue just opened last month in the Hingetown area of Ohio City. Washington says, “Collaborations like this have always been a part of Cleveland’s artistic fabric, so I am thrilled to be a part of such a timely and historic piece.”

During the flag’s visit to Cleveland, members of Twelve Literary and Performance Arts Incubator (352 E. 156th St.) will compose responses, which will be available through the websites and social media of both SPACES and Guide to Kulchur. Twelve Literary and Performance Arts Incubator is an intergenerational space dedicated to teaching, learning, performances and workshops for playwrights, poets and performance artists.

“Art is a jumping off point for community members to discuss violence, both at the hands of police and against police,” says SPACES Executive Director Christina Vassallo. “While the sweeping statement on Dread Scott’s flag may cause discomfort for some, not everyone has the luxury of distinguishing between ‘a police officer’ and ‘all police officers.’”

Obviously, Cleveland’s made national headlines recently over the deaths and subsequent controversy surrounding the murders of Tamir Rice, Timothy Russell and Malissa Williams. In the wake of these recent events, Cleveland hosted the first national Movement for Black Lives meeting. “Since 2015 the Cleveland police department has been operating under a federal consent decree to restore relations between police and residents, and to overhaul policies that allow excessive use of force,” organizers explained in their press release.

Dread Scott’s provocative new work is an update of a flag that hung outside the NAACP headquarters in NYC from 1920 to 1938. Scott originally created the flag as a response to the murder of Walter Scott by a North Charleston police officer last year. As part of its current exhibition, For Freedoms, the flag was displayed on the exterior of Jack Shainman Gallery in NYC, but was moved inside the gallery last week at the request of the gallery’s landlord.

Dread Scott recently said, “During the Jim Crow era, Black people were terrorized by lynching—often public and publicized extra-legal torture and murder. It was a threat that hung over all Black people who knew that for any reason or no reason whatsoever you could be killed and the killers would never be brought to justice. Now the police are playing the same role of terror that lynch mobs did at the turn of the century. It is a threat that hangs over all Black people, that we can be killed by the police for no reason whatsoever...And the police never face justice for their crimes.”

Dread Scott’s work has been described as revolutionary by admirers and “disgraceful” by former president George HW Bush. Scott first received national attention in 1989 for his controversial What is the Proper Way to Display a Flag? The entire U.S. Senate denounced the work and outlawed it by passing legislation to “protect the flag.” In opposition of this, Scott and three other protestors burned U.S. flags on the steps of the Capitol building. Ultimately, the work resulted in a landmark Supreme Court decision regarding the First Amendment.

He and his work has been discussed in The New York Times, Time, Art In America, ArtNews, ArtForum, Sculpture Magazine, Art21 Magazine, The London Guardian and other newspapers, magazines and books. Additionally, he has appeared on many local and national TV and radio shows including The Today Show, CBS This Morning and Oprah. For more information, visit www.dreadscott.net.

Following the RNC, the flag will remain outside Young Kings through July 29.