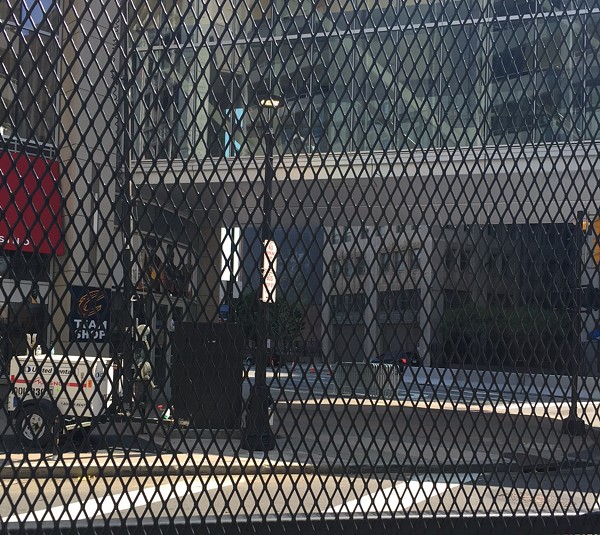 If you look real closely at the picture above, focusing on the middle and squinting a bit, you'll see a small portion of the LeBron banner, the massive 10-story installation on the side of the Sherwin-Williams building that was supposed to come down prior to the RNC. It didn't go anywhere, of course, as it turned out that Cavs fans are a passionate bunch and Cleveland loves nothing more than a good social media outrage session.

Sherwin-Williams was initially going to take King James down, temporarily, and install a banner in time for the GOP's arrival that was to celebrate the company's 150th birthday. The design featured the city of Cleveland's flag.

A change.org petition drive gathered some 20,000 signatures and fans peppered the paint company on social media. In late June, Sherwin-Williams announced a course change, saying the LeBron banner would in fact stay.

"In recognition of fan interest, the company will keep the now-famous LeBron James banner hanging from its global headquarters building," a statement read. Company president John Morikis said, "For 150 years, Sherwin-Williams has been proud to call Cleveland our home, and we're committed to doing the right thing for the people of this great city. For the last year, we've been planning to hang a celebratory banner outside our building during the summer months. But what better way to celebrate our 150th year than with a NBA championship. As a long-time supporter of the Cavs, and the entire community, we want the energy and excitement in this city to continue." The company also made a sizable donation to the LeBron James Family Foundation.

The banner is actually almost totally inaccessible to pedestrians. On Monday night, we walked a circuitous path near Prospect and Ontario, and ended up speaking with the one security guy in the area. After pulling out his earbuds, he said that no one had really come by the banner that day.

We asked him if pedestrians were even allowed to be here. "Well, you're media, so you're OK," he said, gesturing to my credentials.

So there have been some visitors — the Colorado delegates were amped to get a shot, and the guy below managed to get in front of LeBron's open arms, but for the most part, it's quartered off in a slice of downtown that's basically impenetrable to foot traffic. 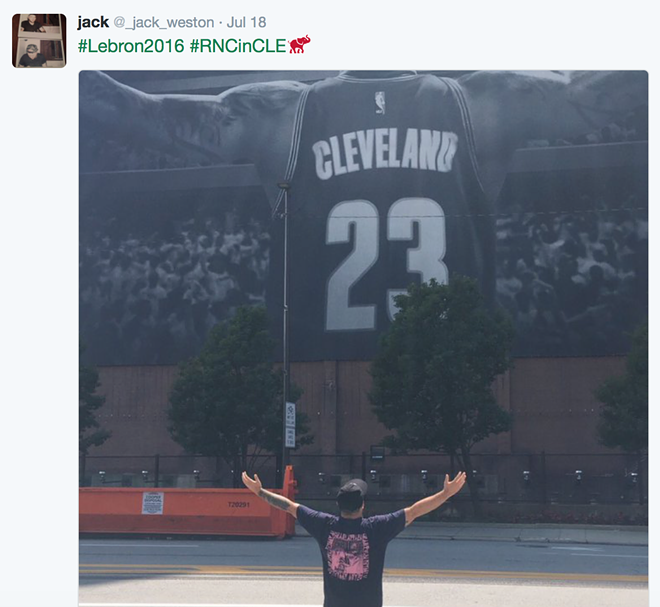