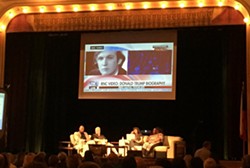 During the grand finale of the Republican National Convention last night, instead of cowering, terrified and alone in their living rooms, The Daily Show co-creator, Lizz Winstead and NARAL Pro-Choice America brought Cleveland abortion activists together in an attempt to "have a laugh and hold onto their sanity" during Donald Trump's official acceptance speech Thursday night.

The panel, consisting of Winstead, Alonzo Boden, Frank Conniff, and a member of the comedy team Lady Parts Justice, Sharron Paul, provided satirical commentary overtop a broadcast of both Ivanka and her dad's speeches.


"This is the 5th time I've done an event at the RNC, there are a lot of people in town who are bummed out that they're here. It's a really fun way to gather a bunch of like-minded people to sit in a room and laugh with some of the funniest comics out there," said Winstead.

"You can look around and remind yourself that you're a part of a community that can make change. The gathering aspect is just as important as being really funny with the comedy show."

The event, complete with gold uterus tattoos, purple uterus cowboy hats, and even a Trump piñata, used the hashtag #RNCircus on Twitter during the "night of commiserating catharsis and a much needed safe haven from Slurricane Trump."
Lady Parts Justice is a team that uses comedy, culture, and digital media to call attention to the destruction of reproductive access. To organize this event, they worked in collaboration with NARAL Pro-Choice America, a group centered around protecting and expanding reproductive freedom and supporting the right to choose.

Earlier in the week, Winstead and Lady Parts Justice visited an anti-abortion luncheon held by Ohio Right to Life. They stood outside and did what protestors do outside of abortion clinics, "We asked them to read our pamphlets, asked them not to go inside, told them we were praying for them. We said, 'you just don't know what's going to happen in those places,'" said Winstead, echoing back to attendees what they do to women who utilize clinics.


"The greatest part about that was some dude came up to us and said, 'You know, you aren't changing anyone's mind with all this yelling,'" recalled Winstead. "Exactly, sir. We are here to show you that when you stand on the sidewalk outside of an abortion clinic, it doesn't change anyone's mind."

Thursday night's pro-choice crowd poked fun at the convention and the largely pro-life Republican party during the entirety of Trump's speech.