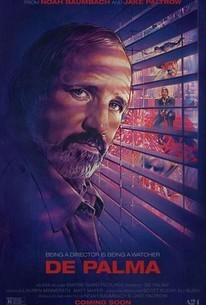 If you can define a “genius” as a social outcast who doesn’t conforming to societal norms and exhibits an obsession with his or her work, then you can add director Brian De Palma to the list.

The new documentary De Palma, which screens at 9:05 p.m. on Thursday and at 7 p.m. on Friday at the Cleveland Institute of Art Cinematheque, explores his work in a 150-minute film that virtually functions as a lecture. The Cinematheque will show seven of his films throughout August.

Having directed timeless classics like Carrie, Scarface, Dressed to Kill and The Untouchables, De Palma deserves his own documentary; however, the film serves no purpose other than to inflate the man’s already soaring ego. Although the film offers fascinating insight into the mind of one of the greats, that’s about all it offers. Visually, there’s nothing special about the documentary; viewers would be better suited to simply just listen to the audio. Though learning the process behind making each film is interesting, the movie becomes tedious, especially when De Palma’s sexist remarks enter the picture.

When De Palma provides commentary on his thrillers, in reality, he provides commentary on the thriller genre as a whole. Frequently known for sexualizing women, making them the victims and subjecting them to the male gaze, thrillers and horror movies continue to be leading examples of how the media objectifies and sexualizes women; De Palma only reinforces these notions. For instance, in describing one of his films, De Palma suggests that “the best way to get people to watch something is to have a woman undressing” and later adds that “if I’m going to put somebody in a dangerous situation, I’d rather be following around a girl than a guy.” “It’s part of the genre,” he continues, “the woman with the negligee walking around the house with a candelabra.”

Though the documentary is slow and frequently depicts women as sexual objects, it does undoubtedly offer a glimpse into the mind of a talented man.