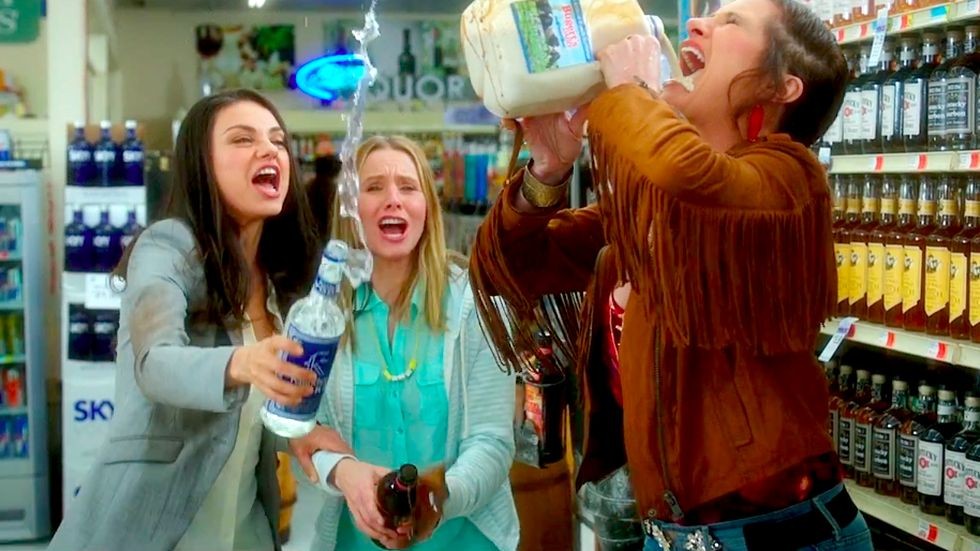 If you manage to stay in your seat for the duration of the film, Bad Moms will prove to be slightly better than its first 20 minutes suggest. That's not saying much, however, given that the first 20 minutes feature some of the most vapid screenwriting since last year's hellacious The Boy Next Door.

Mila Kunis is Amy, an "overworked, underappreciated" Mom. Translation: She works three days a week at a hip coffee company in Chicago and raises two children in a beautiful suburban home with an unfaithful husband so morally and intellectually derelict that he registers as subhuman. Amy's busy, is the gist, perpetually late because she takes such good care of her kids. And the fancy school where she sends them is home to an aggressively influential PTA, lorded over by one Gwendolyn James (Christina Applegate) and her Mean-Girl-ish clique.

The PTA is getting too powerful, too intrusive, and Amy can't take it anymore. She's sick and tired of the standards to which she's being held, as a mother, and befriends two other moms, the doe-eyed goody two-shoes Kiki (Kristen Bell) and the promiscuous drunkard Carla (Kathryn Hahn). Together, they decide to abandon the parental ship and start partying non-stop as a kind of eff-you to the conventional expectations of motherhood.

Presumably intended as hyperbole, or straight visual gag, the entree into this new lifestyle is a slow-mo montage (one of the film's several) in a grocery store in which Amy, Kiki and Carla chug booze and munch on snacks in the aisles before wreaking serious havoc on the inventory. It's a ludicrous and profoundly unfunny scene.

Bell and Hahn are gifted comedians, to be sure. And they both rescue the beleaguered script from absolute worthlessness with a few winning exchanges. (One, however, featuring a slew of insults about Amy's bra and potential date-night outfits, was carbon copied from this year's Boss, also starring Bell, and was worse than the original.)

Written and directed by the writers of The Hangover, Bad Moms feels indebted to the shenanigan spirit of that franchise. And in a year of Girl Power, it's only fitting that the "anything you can do I can do better" mantra is applied to the realm of vulgarity. But the premise is still so stereotypically female — when all is said and done, Amy is running for PTA president against Gwendolyn on a platform of embracing imperfection — that the heightened vulgarity feels forced, the third-act moralizing lame and imprecise.  If anything, it feels like a Hangover brand offshoot, a script cooked up by studio execs to capitalize on Hangover-style humor for a female crowd.

When Amy says 'it's okay to be a bad mom,' she almost certainly means, 'it's okay to make mistakes because we all do.' (But 'it's okay to get drunk all the time' is way more fun to watch play out on screen, right?)

The big problem, for this viewer, was that the writer-director team seemed to fundamentally misunderstand and misrepresent the struggles of motherhood, at least for those outside the sphere of wealthy suburban Chicago. Those mothers' stories are worth telling too, no doubt, and their struggles are real. But if  Bad Moms was meant to be an anthem for mothers, or anything more than a low-grade comedic romp, its notes were blaringly off-key.

Great closing credit sequence, though, featuring interviews with the stars and their mothers. Totes presh.