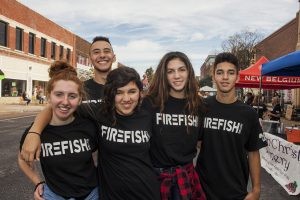 “Our 2016 event promises to be bigger, better and even more exciting than last year's FireFish Festival, which provided a glimpse of what is possible in the reimagining of downtown Lorain as a dynamic, artistic mecca,” says executive director James Levin in a press release announcing this year’s incarnation of the event, slated to take place from noon to midnight on Saturday, September 17, in downtown Lorain. “We hope this highly acclaimed, unforgettable one-of-a-kind annual arts festival will continue to attract thousands of new visitors to this Northeastern Ohio hidden gem on the water.”

The free event will include music, dance, theater and art both on stages and in the “hidden alleys, empty storefronts, balconies and fire escapes.” This year, it will also center on Broadway Avenue’s own “alley,” Black River Lane.

“This slight shift in location connects the Festival more directly to the Black River Landing and waterfront, where more artistic surprises are in store,” says Levin.

Teen arts apprentices from the FireFish Arta Summer STEAM Academy will create the festival’s centerpiece of the festival — a giant FireFish sculpture that comes to life spewing fire.

“The FireFish Festival generated a great deal of excitement in the community and has been an exciting next step in our mission to enhance the revitalization/economic development in downtown Lorain, and ultimately impacting Lorain County,” says Joan Perch, founder of FireFish Arts and Gallery Coordinator at Lorain County Community College’s Stocker Arts Center. “The STEAMAcademy is an example of FireFish Art’s goal to enhance economic and civic revitalization through visionary arts events, pioneering arts programming, youth education and workforce development initiatives.”