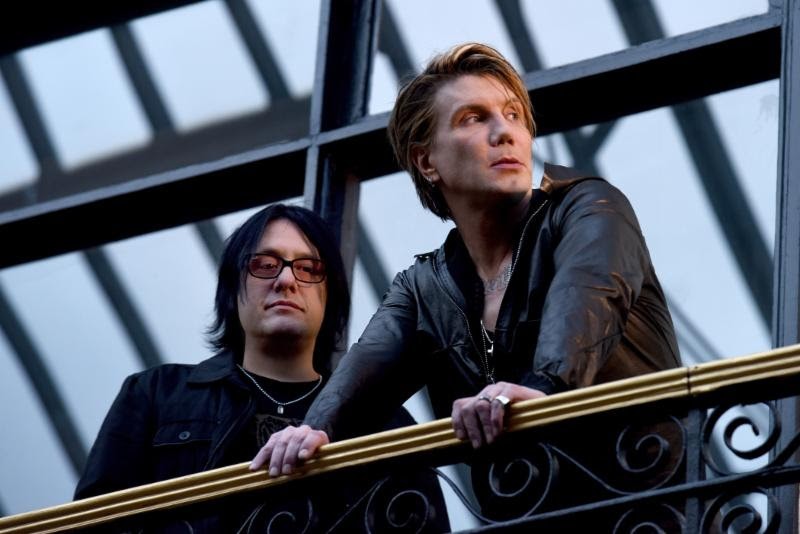 Alt-rockers Goo Goo Dolls sold truckloads of albums in the '90s when they delivered radio 14 Top 10 radio hits, including "Name," "Slide" and "Iris."

But they didn’t always have such a radio friendly sound. When the band first formed in Buffalo in 1986, its music sounded harsher, perhaps reflecting the city band members called home.

“Buffalo was a struggling city when we got together in about 1986,” says singer-bassist Robby Takac via phone from Los Angeles where the band was rehearsing for a summer tour that includes a stop at Jacobs Pavilion at Nautica on Aug. 10. “The steel industry had pretty much moved out. The town wasn’t doing great, quite honestly. The music scene was awesome there when we were kids. Our social scene was small but pretty vibrant. That’s where everything came together. In my mind, it was a much more open scene back then. People weren’t into just Jamaican jungle and EDM or that kind of categorization.”

Takac says he has fond memories of the band’s first-ever show.

“We played at the local punk rock club for half a case of beer, which was gone before we were finished,” he says. “It was an uneventful punk rock show but there seems to be an awful lot of people who remember being there. I don’t remember it too vividly.”

The Splatcats, another Buffalo-based punk band, helped the Goo Goo Dolls get their first record deal with Celluloid Records.

“We did a demo maybe six weeks after we were together,” says Takac. “That made its way out. Some of the songs became our first album, which came out in 1986. From there, we went to Metal Blade and many of its subsidiaries.”

“I can remember arguing about whether we should try something new or stick with the thing we know that people who like us dig,” says Takac. “We wanted to move forward. A lot of our favorite bands were doing things that were much more advanced. We did what we were comfortable with. What we were good at was being super loud and causing a scene. Little by little, we gave ourselves 30 years to figure out what we wanted to do. The music has changed so dramatically in that time and [singer] John [Rzeznik] especially has looked out there to see what was going on and how we can apply to it what we’ve done from the beginning.”

The band came of age during a time when groups would change their sound and evolve, so it wasn’t a huge shock when its sound morphed.

The band had one of its biggest breaks with a slow song, the power ballad “Iris.” The guys originally recorded the tune for the 1998 film City of Angels and then included it on their studio album Dizzy Up the Girl.

“When we got asked to be on that City of Angels record, it was U2 and Peter Gabriel and Alanis Morissette and I’m forgetting some of the big ones,” says Takac. “It was crazy. We thought it was coup that we got on the record. We didn’t think much of it. John got called into the movie producer’s office and had a demo of the song and brought in a guitar and played him the rough sketch. The producer loved it and told us to do it. We also decided to put it on our album [Dizzy Up the Girl] and against the odds it ended up becoming a standout track. Think of how different our career would have been if we hadn’t recorded that song.”

As soon as the band finished its last tour in support of 2013’s Magnetic, it started writing the songs for its latest effort, Boxes. Takac says it worked differently on the album and collaborated with other writers more extensively than it has in the past.

“With this record, we embraced that process of taking it song by song in a way that we weren’t able to on the last record,” he says. “We had never done that before. Sharing songwriting with other people was something John had to grow into a little bit more. I’m super proud of this record. We recorded all over the country with a bunch of different producers in New York and Los Angeles and the state of Washington. We worked a little bit in Buffalo. It was a super great experience and very positive.”

Featuring Rzeznik’s raspy vocals and a subdued guitar riff that sounds a bit like something the Edge might play, the first track, “Over and Over,” includes the phrase “turn it up” in the refrain, setting the tone for the disc, which puts an emphasis on uptempo songs rather than ballads.

“[‘Over and Over’] is the first song that we sat together in a room and wrote together in ten years,” Takac says. “John had this idea for a riff and we brought it to other producers and they didn’t like it. We brought it in to Drew Pearson, who was working on some other songs with us, and he said it was a great song, and he helped us get the most out of it. I’m proud of it. I hope it becomes a single [after ‘So Alive’].”

In retrospect, Takac says he and Rzeznik didn’t imagine the group lasting much longer than a few years. Thirty years on, it’s remarkable the two are still together (other members have rotated in and out of the band).

“We were glad to get that half of a case of beer and then figure out how to get another one,” says Takac. “I don’t think when you’re 20, you think about anything you might be doing when you’re 50, especially when you’re a punk rocker kid. It’s like, ‘Make it to 25? Are you kidding me?’”

Despite the “ups and downs” the band has experienced, Takac says he’s happy to still be touring and recording with Rzeznik.

“There’s a huge advantage to having years of doing that with the same dude you’re standing next to,” he says. “It’s more than that too. It’s being in the van and figuring out how you’re going to pay the rent and dealing with being married a couple of times and dealing with a couple of drummers. We’ve been managing chaos this entire time. That’s just normal for us. Every time we start a run for a summer tour, we have to hire on some new dudes and it’s funny to watch new people come in and see how this operates. It’s been a work-in-progress for 30 years now. The way we do things is unique to our situation, but we tend to get it done.”