Sausage Party: So Do the Hot Dogs Have Penises Too, or What? 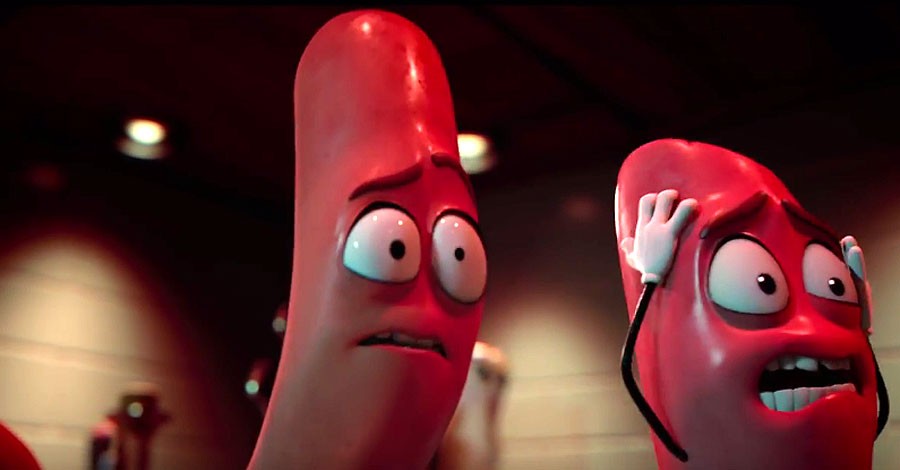 The competing interpretations of the new adult animated film Sausage Party, within your group of friends, are likely to be the following:

On one side: "This was a smart and probing existential allegory that happens to be suffused with potty humor. Hilarious, right?"

On the other: "This was a garbage-bin late-night skit engorged to feature length, almost certainly dreamed up within a poof of pot smoke in either Seth Rogen's or Evan Goldberg's basement; and any flickering moment of intelligence must be purely accidental. Unbearable, right?"

Frank (Seth Rogen) is our hot-dog hero. He lives at a Shopwell supermarket alongside whole foods and other packaged goods who all exist in a utopia of hope. They worship the human shoppers as gods, and wait every day to be selected for a divine afterlife beyond the doors.

But after a nasty spill and near-brush with death, Frank learns the truth. He smokes weed out of a kazoo with "the non-perishables" — a Twinkie (Scott Underwood), a jive-talking box of grits (Craig Robinson), and a "Firewater" bottle of whiskey (voiced, a la Native American Chieftan, by Bill Hader) — and is told that the afterlife is a hoax. Naught but gruesome death awaits outside of Shopwell.

Frank must confirm the revelation for himself and so ventures to a hellishly-tinged pots-and-pans aisle — a pretty good gag — while his crush, Brenda the bun (Kristen Wiig), must evade the advances of a murderous (literal) douche (Nick Kroll) — one prays the writers recognize this as a misstep — and suffer the bickering of a Jewish bagel (Ed Norton, aping early Woody Allen?) and an Arab lavash (David Krumholtz) whose arguments about aisle occupation — get it? — are neither nuanced nor funny, plus fend off the advances of a promiscuous taco named Teresa (Salma Hayek).

A b-storyline follows the remaining hot dogs from Frank's package in the real world. There, misshapen runt Barry (Michael Cera) teams up with a Stephen-Hawking-inspired wad of chewing gum (Scott Underwood again) to outwit a stoner (James Franco) and return to Shopwell.

With me so far?

So do the hot dogs have penises, too?

Needless to say, the plot's absurdity needn't be subjected to questions of anatomical verisimilitude. Nor should the script be rewarded with comparisons to famous atheist texts or — for heaven's sake — Plato. The creative team is much more concerned with ensuring that the hot dogs are positioned to look like penises as often as possible.

And look: For better or worse, this crew is really good at that inane, lewd, boyish content. Rogen enjoys that stuff (and we do too, a lot of the time!) If Rogen is also keen to explore the larger questions of the universe, he should know that in an animated grocery store, he can't stick his dick in a cake and eat it too.