The Scottish Play Holds Forth at Ohio Shakespeare Festival 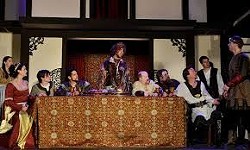 Theater people are very superstitious. A light is placed center stage in many theaters, appropriately called the “ghost light,” to scare off the demons which inhabit many performance places.

The phrase “break a leg” is the traditional well wishing greeting used before a production as it is considered “bad luck” to wish someone "good luck" in the theatre.

Never, never is the name of “M/A/C/B/E/T/H” spoken by producers, directors or casts of “that” script. The term “The Scottish Play” is used instead. Actors even avoid quoting lines from the script before performances, particularly the witches’ incantations.

If an actor speaks the name "Macbeth" in a theater prior to one of the performances, he or she is required to leave the theater building, spin around three times, spit, curse, and then knock to be allowed back in.

One version of this legend claims that it was the actor who played Lady Macbeth who died during the play's first production run and that Shakespeare himself had to assume the role.

Obviously, one of the cast of the Ohio Shakespeare’s “The Scottish Play” must have stated the play’s name, or said a speech, before the recent Saturday night production of the show, which is onstage on the grounds of Stan Hywet Hall. For a few minutes after the lights went up to start the show, rain poured down, drenching the audience and the actors. But, true to another theater tradition, “The show must go on,” and, so it did!

Macbeth is one of Shakespeare’s shortest plays. It is a tale of greed, the desire for power and the vile things that people will do to get what they want. A gruesome tragedy, it tells the tale of an ambitious man, stirred on by his evil wife, who becomes king and holds on to his power via a reign of terror.

As with all of Shakespeare’s tragedies, it is a tale which highlights the flaws of its protagonist, who, in this instance, is transformed from a noble war hero into a tyrannical murderer.

Macbeth is filled with often quoted lines, “If it were done when ‘tis done, then ‘twere well it were done quickly” (Macbeth’s soliloquy on whether he should kill Duncan), “Out, damned spot; out, I say” (Lady Macbeth’s speech reflecting her guilt for orchestrating many of the murders by or caused by her husband), “Life’s but a walking shadow, a poor player that struts and frets his hour upon the stage, And then is heard no more. It is a tale Told by an idiot, full of sound and fury Signifying nothing” (words uttered by Macbeth after he hears of Lady Macbeth’s death).

The Ohio Shakespeare Festival, housed on the grounds of Stan Hywet Hall and Gardens, is now in its fifteenth year. It is a professional theater company dedicated to “articulating the inherently theatrical components of Shakespeare and his fellow playwrights throughout the ages in a manner that enables the collected imaginations of the artists to meet the collective imagination of the audience in a public celebration that transforms the world in which we live.”

You don’t go to OSF expecting the same quality of performance as you would at The Stratford Festival in Canada or The Oregon Shakespeare Festival in Ashland, where classically trained actors hold roost and massive amounts of money are spent to stage a production.

You go to be enveloped in the beautiful Stan Hywet Hall gardens, forests, and buildings.

You go for the delightful Greenshow, a pre-main production which comically blends together a Shakespeare tale with whatever pops into the minds of the director and his staff. On the night I went there were segments of Les Miz and Man of LaMancha, and a tennis ball battle, meshed into the tales of old England stories.

OSF’s production of Macbeth is well done, easy to understand (American pronunciation is used), and moves along at a comfortable pace. The acting is uneven, as can be expected from a company whose performers are not all classically trained, but that does not distract from the overall pleasure of the evening. Bernard Bygott, a graduate from CWRU/Cleveland Playhouse’s MFA program did a nice turn as Macbeth.

The rules: If it rains, have an umbrella or raincoat available for they seldom cancel a show. If there is dangerous weather, the audience takes cover in the nearby Corbin Conservatory. If the weather clears, the show will continue where it left off.

“Off” bug spray is available at the ticket and concession tents.

You can bring a picnic. There are tables and lots of places to lay out your food and beverages. If you prefer, there are snacks available at the concession tent.

Exploring the grounds of Stan Hywet and the glorious gardens is encouraged.

The Greenshow starts at 7:30 and you can eat and watch songs, dances, parodies, sword fighting and general revelry.