Jeffrey Dahmer Movie Filming in Cleveland as We Speak 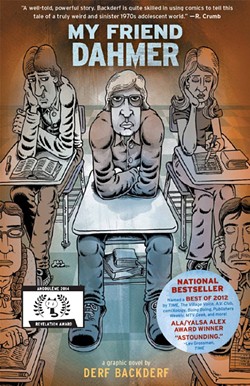 My Friend Dahmer, a film based on a book of the same name by local-legend cartoonist Derf Backderf, has been shooting, and continues to shoot, all over Northeast Ohio.

Unlike the 2002 Jeremy Renner vehicle Dahmer, a more traditional biopic, My Friend Dahmer focuses on the infamous serial killer's Ohio high school years. It's "an intoxicating blend of a coming-of-age tale with the borrowed hook of a serial killer narrative," if you ask the summary wizards at IMDb.

It's written and directed by Marc Meyers, something of an unknown quantity in the mainstream, who's done two festival-circuit indies and a handful of shorts prior to this.

"More and more films are shooting in greater Cleveland," said Film Commission President Ivan Schwarz, in a press release. "We attribute that not only to our amazing variety of locations and our local production professionals, but to the community spirit that productions experience when they arrive.