Down for the Count: 'Hands of Stone' Underwhelms Inside and Outside the Ring 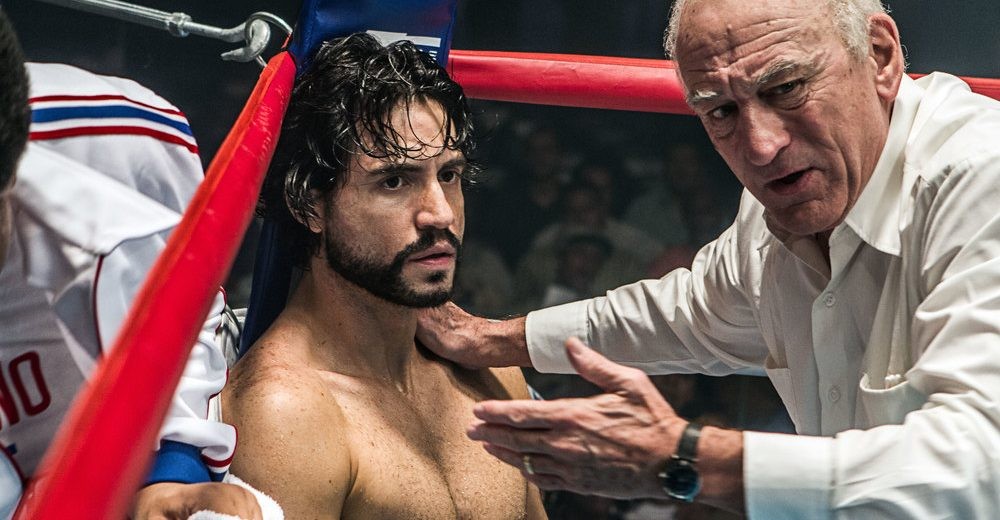 Hands of Stone, about the life of boxer Roberto Duran, is directed by Jonathan Jakubowicz with all the precision of a person who seems himself to have taken one too many blows to the head.

The film combines two of Hollywood’s most tired tropes: the life-skimming biopic and the in-search-of-redemption boxing pic. And if you feel, upon hearing the words “boxing biopic,” that you could summarize the film’s beats without even seeing it, that’s most likely because you could.

The film starts promisingly enough. A low camera trek follows the heels of young Duran as he dashes through the slums of Panama. Poor and angered with the violent American occupation in the region, the young Duran is hungry as much for food as he is for agency, and, after making some coin beating down another local boy in a street fight, he finds himself being taken in by a local trainer.

It’s after this opening scene, when Edgar Ramirez takes over as the adult Duran, that things begin to get muddled. Political strife, a stable of unnecessary characters, leaps in time and place that are either sloppily handled or just downright confusing, changes in point-of-view characters and even a single, brief scene that dissolves jarringly into black and white, all lead to a truly messy affair.

Ramirez has charm and talent to spare, but the character of Duran seems to go from one obnoxious antic to the next as the scenes of his life play out. Ray Arcel, a famed veteran trainer played by Robert De Niro, is brought in to tame the wild Duran, and eventually shepherds him to a championship bout against Duran’s arch-rival Sugar Ray Leonard.

(Arcel is given a few sublots of his own which are barely worth mentioning, including dull scenarios with his ever-patient wife, an adult, drug-addicted daughter who appears out of nowhere near the end of the picture, and the bubbling up of past trouble with the mob, all of which add even further to the film’s confused focus.)

Duran’s wife, Felicidad, played by the gosh-wow-stunning Ana de Armas (War Dogs), is given little challenging to do here other than look lovely in bad ‘70s attire. She spends the film popping out children and cheering Duran on to further bludgeoning. (In its one break with cliché, our hero pugilist’s love interest seems to care little for the health of her champion beau, pausing not even once to ask, Hey, maybe it’s time to stop getting your brains beaten in?)

Popster Usher — or, beg your pardon, Usher Raymond IV, as he’s listed in the credits — does play famed pretty-boy boxer Leonard with a hint of complicated brio, but Raymond looks just as hopelessly miscast in his boxing scenes as you might imagine. The real trouble with the Leonard character is that he actually comes off as likeable and root-worthy, whereas our hero Duran squanders any chance for our sympathies by remaining the same brash, self-aggrandizing child from the first frame to the last.

As Arcel, Robert De Niro actually seems to care about his performance in this film, which is a nice break from his recent wheel spinning, but ultimately you can’t help but feel that his is the old ‘a good performance in search of a better movie’ type of turn.

In the end we’re left asking, just what is Duran fighting for? For his country? Though we’re pounded over the head with nationalistic flashbacks from his restive childhood, we’re never made to feel that Duran hopes for anything more than Panamanian hero status in order to feed his own ego.

Is he fighting for his family?  His children only serve as punchlines — he insists on naming each of his sons Roberto — and the relationship with his wife, which could have been the steadying center of the film, seems rooted solely in the fact that they like to look at each other naked.

So is he fighting for himself? Maybe, but the character is so flat it’s hard to believe he has any real internal need for personal revival. Perhaps, ultimately, he's fighting for Arcel. But the relationship between Duran and his trainer lacks the complexity and heft to hold this messy and unsatisfying film together.

Hands of Stone is rated R and opens Friday in wide release.