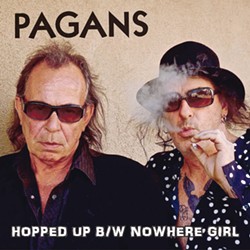 Pittsburgh-based Get Hip Recordings, for example, has just announced that it's “proud” to present two new tracks from Cleveland’s iconic proto-punk outfit, Pagans, who recently reunited to release 2014’s Hollywood High and embark on a limited tour.

Taken from the sessions that produced Hollywood High, "Hopped Up" and "Nowhere Girl" demonstrate that the punk act hasn’t lost its touch as Pagan frontman Mike Hudson sneers and spits his way through the songs, exhibiting as much vitriol as he did back in the '80s. “Hopped Up” is streaming now; the 7-inch single will be available on vinyl and as a download on Sept. 2.