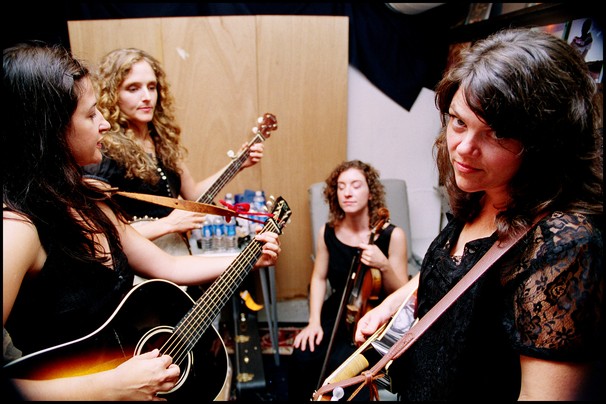 A few years back, the St. Vrain Creek in Lyons, Colorado, flooded the town something fierce. Across Boulder County and much of the central part of the state, a cold front mingled with humid air from the south and produced a series of natural disasters that left eight dead.

"This was the town that really brought our band together," Abigail Washburn tells Scene. She's talking about Uncle Earl, an old-time Appalachian string band based for some time in Lyons. "The flood had a devastating impact on so many people."

By then, though, in 2013, Uncle Earl hadn't been as active as they were in the 2000s. The core lineup had moved on to other projects, but when the call for fundraising and support came in the wake of the floods, each musician stepped up and rallied. They loved one another, after all.

"We just all wanted to see each other and be with each other again and check in after several years of being apart," Washburn says. (She's calling in from Lyons, actually, where she's staying with Uncle Earl founder KC Groves before taking a vacation to Australia.) The RockyGrass festival came together in short order, despite logistical and meteorological challenges, and Uncle Earl (Washburn on banjo, Groves on mandolin, Kristin Andreassen on guitar, and Rayna Gellert on fiddle) reunited to play the event.

From there, the musicians made an informal pact to keep playing brief reunion sets, short tours like the one that lands in Cleveland Sept. 4, and so they have.

"We just so enjoyed being together again," Washburn says. "When we stopped playing in that particular configuration, we all felt a lot of sadness about not having that time together. And we know this music had inspired a lot of people — especially young women — to start playing music, whether it be old-time or not. They saw this group of women up onstage, traveling and playing music, and they thought, 'I can do it too!' We want to go say hi to them again." (Interestingly enough, Colleen Miller, at Music Box Supper Club, helped support the band in their earlier days in her role at the Old Town School of Folk Music in Chicago.)

With that in mind, the band plans on touching all corners of the canon for these current shows. Going back through the albums and EPs today, it's clear that music is as timeless as ever — even as it remains rooted in a very specific era of American history.

The band's last album, 2007's Waterloo, Tennessee, opens with the upbeat melodies of "Black-Eyed Susie," which bleeds into a mysterious final few seconds where the title is sung in the background of the strings. Then, the rest of the album springs forth.

And it's a dynamic trip, this album. The band's last notch in the history books before parting ways for a spell is a varied jaunt through a different era. Communicating lessons on love, loss and happiness, Uncle Earl spins through that world of "old-time music," a patchwork of traditions that grew out of the earliest immigrants to America from Ireland and Scotland, and slaves from West Africa. When Africans were brought to America, slave traders played music on the ships to improve transatlantic survival rates – a way of keeping their spirits intact. Back on the plantation, slaves would play trancelike banjo music while Irish owners would perform a fiddle melody on top of that. “It's an extremely bittersweet root,” Washburn says of this important development in American music history. Jazz, blues, bluegrass and, later, rock 'n' roll all evolved out of the old-time Appalachian lineage.

Back around the turn of the millennium, genres like bluegrass and the amorphous “Americana” tagline began growing in popularity and shining a bright spotlight once again on banjos and fiddles. Unclear Earl, devoted in each musician's love for the legacy of those instruments, was there to ride the wave.

"Once this configuration came together, it just really took off," Washburn says of the mid-2000s. "It's like the band understood its purpose, and it was very clear that were an old-time Appalachian band that was going to take the music to different places in our collaborative songwriting."

Plus, the chemistry was off the charts, she says. That particular lineup toured here in the States and internationally for six years, laughing and loving one another and their growing fan base.

Part of the allure then and now is that Uncle Earl comprises a group of women in what might seem, if you dwell too long among the distorted world of music journalism, like a male-dominated community. Washburn points out, though, that the old-time traditions included many women and female-fronted bands. She cites the Coon Creek Girls, out of East Kentucky, as one of her favorite outfits from the 1930s. "We wanted to stay in that tradition, and we've loved doing that," she says.

Crediting, in part, O Brother, Where Art Thou?, for bringing old-time music to the mainstream for a while, Washburn and her all-women band found a nice in the right time – and enjoyed what they were doing. “We just laugh and laugh,” she says. “We have so much fun playing together.”

This time around, the band is touring in a bus – as opposed to a van, like the old days – and touring with their expanding families. Some things change, surely, but most things stay the same.