Antun Lewis, Convicted of Setting Cleveland's Deadliest House Fire, Will Not Get a Third Trial

Lewis has maintained his innocence.

Most recently, he appealed the second conviction and argued that federal prosecutors essentially plowed through the same case that brought the first conviction — once again "[holding] all the inconsistencies and unanswered questions [as] issues for the jury to decide." The 6th U.S. Circuit Court of Appeals didn't buy that, insisting that prosecutors pursued a more robust case the second time around — one with more witnesses — and that the defense for Lewis didn't address its own stack of unanswered questions from the first trial (e.g. Why did Lewis' van smell like gasoline 10 minutes after the blaze?) 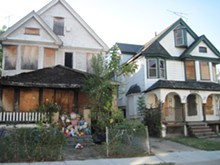 Lewis remains in the midst of his 35-year sentence in federal prison.

"We are gratified that the tireless efforts of the investigators and prosecutors who worked on this case resulted in the killer being sent to prison for several decades," U.S. Attorney Carole Rendon said in a public statement Aug. 24. "Today's ruling means the families can rest knowing Antun Lewis will remain in prison for a long time."