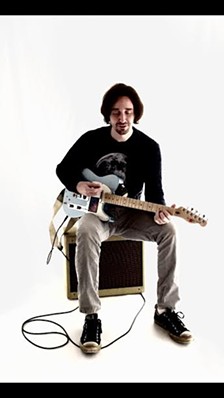 He solely wrote and recorded the forthcoming album, Meaninglessness, due out next month. He also played all the instruments and made the artwork himself. The LP will be released via Exit Stencil Recordings, the same label that put out 11868, the band’s 2013 debut.

A 12-track, “lyric-driven and perception-bending LP based on observations from Spitalsky’s life,” the album shows Spitalsky’s love of music from the ‘50s and ‘60s.

The band was nice enough to allow us to exclusively premiere the single, "Over Expose," a rollicking tune that shows off Spitalsky's raspy vocals and keen power-pop sensibilities.

"This song hints at the search for permanence or the realization that it doesn't exist; there is no magic, only trickery," says Spitalsky. "It's as though there are these small, delicate things that can be so meaningful to one person, and so trivial to another. When you feel you've been burned by someone who doesn't see them, it's easy to stop believing in these small, delicate things. 'I'm getting used to you/I'm getting used to losing you'; this is about how the heart can only withstand so much let down before things become meaningless and the precious metals of the heart patina. That's why I feel it's the perfect opening track for this album and a threshold from 11868."

The band plays a Vinyl Release show on Sept. 30 at the Happy Dog.