Too Many Sci-Fi Cliches in New Thriller 'Morgan' 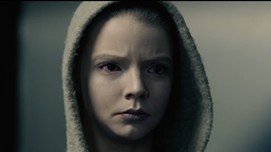 Morgan, the new sci-fi thriller that opens areawide on Friday, has a familiar story at its core. Like last year’s Ex Machina, the film centers on an android who has so many human characteristics, you’d swear the thing is human.

But unlike Ex Machina, which provided a slew of intriguing twists and turns while taking a fresh approach to the genre, Morgan follows a familiar trajectory, one that dates all the way back to Mary Shelley’s Frankenstein, a novel about all the bad stuff that happens when you mess with nature.

As the film commences, corporate troubleshooter Lee Weathers (Kate Mara) drives to the compound where Morgan (The Witch’s Anya Taylor-Joy) currently lives. The android caused a bit of a ruckus when she attacked Kathy (Jennifer Jason Leigh), one of the scientists working at the facility, and gouged out her eye. When the no-nonsense Lee arrives, staff members try to befriend her and tell her how attached they’ve become to Morgan, despite the violent outburst. But Lee’s expressionless countenance is such a turn-off that they quickly realize she’s not approachable. Kathy, in fact, refers to Lee as an “assassin” in a moment that serves as a foreshadowing.

Morgan certainly is an oddity. Sitting quietly in a cell, Morgan listens to classical music while she plays chess. She speaks slowly and deliberately when asked questions about the “incident,” admitting that she made an “error” in judgment when she went after Kathy. When Dr. Alan Shapiro (Paul Giamatti), a psychologist who specializes in assessing androids, arrives, Morgan must pass his test if she wishes to avoid termination. Needless to say, things don’t go so well with the pushy psychologist, who goes out of his way to press Morgan’s buttons. At this point, Lee realizes she must terminate Morgan by any means necessary. Hand-to-hand combat ensues.

While the film provides a twist at the end, it’s not enough to redeem its formulaic approach and make it more than a run-of-the-mill sci-fi thriller.

Writer-director Luke Scott, the son of auteur Ridley Scott, possesses a visual style that’s well-suited to the genre. The dimly lit scenes have a clinical feel to them, and the movie stacks up well against modern-day dystopic flicks such as The Hunger Games and Divergent but without catering to the young adult crowd.

That said, this is a story we've heard before.